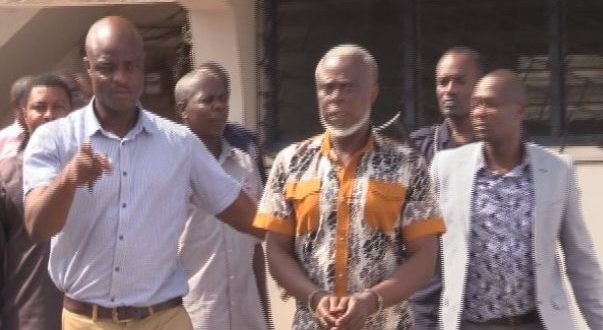 The have all pleaded not guilty and have been granted bail.

Giving his Evidence-in-Chief while being led by Winifred Sarpong, a Principal State Attorney as the 11th Prosecution Witness in the ongoing case, the officer said, he examined 13 electronic devices.

He told the court that, on October 14, 2019, he received a written request from the investigation department of the NIB through the Director to obtain and examine some electronic devices.

These devices he said were accompanied by a court order while they were sealed in an envelope numbering 13.

He told the court that, there were 10 mobile phones and three tablets with the names of the accused persons and others.

He also said, the devices were brought to them by Chief Inspector Augustine Nkrumah.

He told the court that, as part of his day-to-today activities, he used forensic tools to extract data or materials from electronic devices.

“My department has an extraction device that we connect electronics devices to, for extraction purposes,” he noted.

Regarding the names on electronic devices that were brought to him, he said the devices were labeled as “Bright Debrah, Callister Ziaba, Col. Gameli, Ezor Kafui, Dr. Frederick MacPalm.

The Cyber Security Officer told the court that, he called his team of officers and “we set out to do an extraction on the electronic devices.”

The witness said, “each device was connected to the extraction machine and we instructed the machine to extract the materials or data.”

He told the court that, out of the 13 devices, 11 of them were successfully extracted.

But, two of them – Samsung notebook 2 and iPad mini were not accessible to the extraction device.

He said, all of these extracted data was put on an external hard drive while all the phones were put back in an envelope and sealed.

He then issued a report and submitted to the investigation department of NIB through the Director.

He told the court that, after the investigation team had done the analysis of the data, they again requested that the extraction team of the technical department print same data from the hard drive.

“This data was found on Samsung Galaxy S7 and was the only phone that had data relevant to the investigation team’s case. The technical team went ahead to print the data.

The extraction team went ahead to print out the chats without media because they requested for only chat and per the extraction device media files are separated from chats.

A three member panel of the High Court presided over by Justice Afia Serwah Asare-Botwe with Justice Stephen Oppong and Justice Hafisata Amaleboba has adjourned sitting to April 12, for continuation.