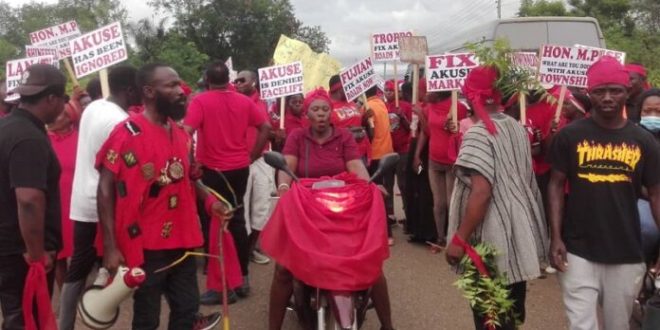 Commercial drivers and residents in Akuse and its surrounding communities in the Shai Osudoku district have embarked on a demonstration over deplorable roads in the enclave.

The demonstrators clad in red and black apparel blocked roads and burnt tyres amid possession of placards with varied inscriptions to vent out their sentiments.

According to them, the deplorable roads in the area are negatively affecting the local economy.

The leaders of the demonstrators say they have written many letters and petitions for the road to be rehabilitated but nothing has been done.

“We have written letters to the assembly, the VRA, and other companies to all help rehabilitate the road but they didn’t mind us.”

Commercial drivers operate at a loss due to frequent breakdowns of the vehicles due to the poor roads compounded by the high cost of fuel.

Many residents in parts of the Eastern Region continue to complain about poor roads, however, the Eastern Regional Minister, Seth Kwame Acheampong on September 19, 2022, during his turn of Meet the Press at the Information Ministry disclosed that a total of 1,487.62km of road has been completed in the Region since 2017.