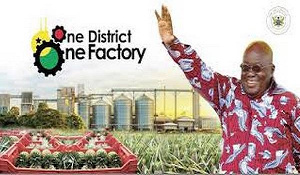 The governing New Patriotic Party (NPP) has been touting its achievements in four years at a forum held in Accra.

Addressing the public during the Nation Building Updates held at the Cedi Conference Centre of the Department of Economics, University of Ghana, on Thursday, Vice President Dr Mahamudu Bawumia said job creation is among the NPP government’s successful feats.

“We have created jobs, especially for the youth,” he said, before revealing that the flagship 1D1F project has created nearly 19,000 direct jobs across the country.

“As a result of our industrialised transformation, nearly 19,000 direct jobs have been created by the 76 operating 1D1F firms and helping it to restart operation; Anglogold Ashanti, Obuasi mines have employed over 4, 000 people. We have revived companies like the Ghana Publishing Company as well as Ghana Post,” he touted.

The weekly Nation Building Updates provide government spokespersons or officials the opportunity to detail achievements under the Nana Addo Dankwa Akufo-Addo administration since taking the reins of power in 2016.

Speaking at the event, the Vice President said: “Another major challenge we sought to address was the hopelessness and despair that the lack of employment opportunities under the previous NDC government had plunged our youth into. The human cost on the number of able-bodied of educated youth of this country by the economic mismanagement of the NDC government had grown to become a national security threat. Nothing is more dehumanizing and more frustrating for young people than being jobless. We did not run away from the challenge, we took the bull by the horn and in four years, we have created over two million jobs in the formal sector.”

He said in four years, the Akufo-Addo-led administration has stabilised the economy.

“Notwithstanding COVID and its implications and notwithstanding that this is an election year, Ghana in 2020 has seen the lowest depreciation since 1992,? he stated.

Previous US election: Trump signals he is prepared to leave White House
Next Man Stabs Cousin To Death With Screw Driver Over Woman