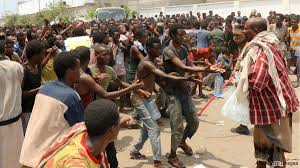 Africa migrants detained in a football stadium at Yemen

Children are among over 2,000 African migrants rounded up and detained in a football stadium in Yemen, an official for the International Organization for Migration (IOM) has told BBC Newsday programme.

Olivia Headon, IOM spokesperson in Yemen, said the migrants, predominately from Ethiopia, Somalia and Djibouti, are being held in Aden, Abyan and Laj in southern Yemen.

Ms Headon said the migrants were on their way to Saudi Arabia and other Gulf countries and were apprehended at military checkpoints and brought to football stadiums and a military camp.

She said the migrants are willing to do “anything and any job they find”.

“Even those who aren’t children but are still a really young group, they’re like 18,19, 20, and they’re all extremely vulnerable to abuse along this route, potential trafficking and abuse once they get to their final destination, in terms of what type of labour they will be doing and what type of pay they will get,” said the IOM official.

She said in the Gulf and Middle East and North Africa region, women often end up as house maids, cleaners, gardeners, but it remains unclear what kind of jobs children aged between 10 and 12 were “expecting to do”.

Yemen has been devastated by a conflict that escalated in March 2015, when the rebel Houthi group seized control of much of the west of the country.

The war has killed tens of thousands and put Yemen on the brink of famine.

Ms Headon said Yemen has now set stricter rules for irregular migrants and that they could be repatriated to their countries of origin on a voluntary basis.