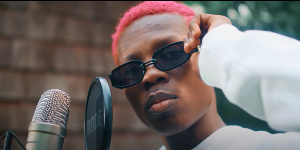 AFCON2021: Strongman ‘calculates’ how Black Stars can qualify to the next stage

Black Stars competing at the 2021 AFCON

There is hope for Ghana at the AFCON, Strongman reveals

Rapper Strongman has made some calculations to prove that if the Black Stars manage to beat Comoros in their upcoming game on Tuesday, they will qualify to the next stage of the tournament.

The Black Stars have not been able to win their first two matches at the ongoing African Cup of Nations in Cameroon.

It seems all hopes are lost as supporters who have been cheering the team from Ghana have said that the players might soon be coming home due to poor performance.

When the Black Stars came against Gabon on Friday, captain of the side, Andrew Dede Ayew in the 18th-minute scored a goal to put Ghana in the lead but the Gabonese side cut short their victory with an equalizer at the 88th-minute with a goal from Jim Allevinah.

In a post sighted by GhanaWeb, Strongman explained to Ghanaians how the Black Stars can make it out of the group stages.

“Now Morocco has to win against Gabon then if Ghana score like 3 or more goals against Comoros, we can qualify Hmmmmmm #TeamGhana.”