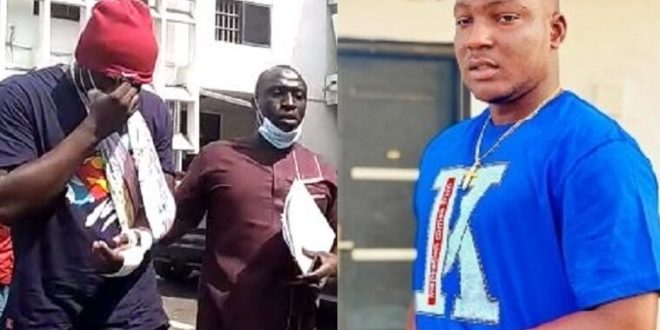 One National Security Officer at the Presidency Collins Kwaku Kwanin aka Kola has been remanded in Prison Custody for one week by Circuit Court in Accra presided over by Mr. Emmanuel Marvin Essandoh

Collins Kwaku Kwanin aka Kola, is the man behind the shooting of Pius Asiedu; a journalist with Newswatchgh.com and two others.

The Journalists were at the at the polling station where they were providing coverage for the December 7, 2020 election.

Appearing in court on Thursday December 17, 2020 Collins Kwaku Kwanin pleaded not guilty to six charges including causing unlawful harm and use of offense weapons.

Although his Lawyer pleaded that his client be granted bail but the court denied him.

The prosecution, however, did not object to the plea for bail but the court said the victims are not well and are receiving treatment.

The court, therefore, remanded the accused to police custody to reappear on December 24 by which time the court believes the victims will be well.

Meanwhile, Director of Operations at the Presidency Lord Commey in a statement earlier indicated that the staff of the Presidency was just assisting the Police with its work indication that he cannot be condemned because he has not been proven guilty by any court.

He called on politicians not to politicize such sensitive issues.