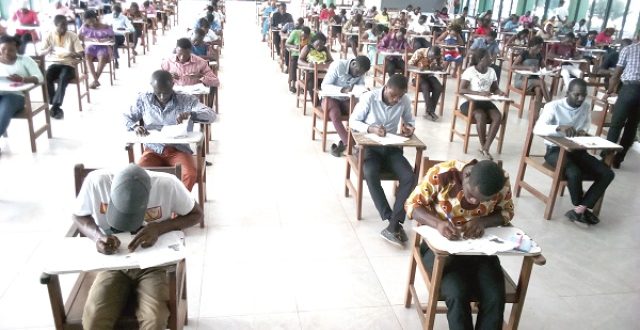 The National Teaching Council (NTC) has released the results of the maiden teacher licensure examination.Out of the 28,757 teachers who wrote the examination, 21,287, representing 74 per cent, passed, while 7,432 failed.The results of 26 candidates have been withheld pending the completion of investigations into their alleged involvement in examination malpractice, while 12 have had their entire results cancelled.The results have been posted on the council’s online portal for candidates to access them from today.Details of resultsGiving details of the results in an interview in Accra yesterday, the Executive Secretary of the NTC, Dr Mrs Evelyn Owusu Oduro, asked all those who sat for the examination to check their results from the NTC online portal at www.exams.ntc.gov.gh, using their personal identification numbers (PINs) and the serial numbers used during the registration for the examination.“Candidates can also obtain their results at the colleges of education where they sat for the examination,” she directed.She said even though there were failures, the outcome of the examination was encouraging, particularly so when it was the maiden edition.StatisticsGiving statistics of the results, Dr Mrs Oduro said out of the 13,110 females who sat for the examination, 3,938 failed while out of the 15,647 males who wrote the exams, 3,532 failed.She explained that those who failed would be required to join the next batch to write the examination in March this year.She said the licensure examination had come to stay and that those without the licence would not be allowed to enter classrooms to teach, be it in public or private schools.Targeted candidatesDr Mrs Oduro explained that the targeted candidates were those who completed colleges of education this year or those who read Education in the various universities and colleges who were desirous of seeking employment with the GES.The executive secretary explained that all newly trained diploma students from the various colleges of education who wanted to teach would be required to write the examination in their respective colleges.She explained that those who were already teaching, both in public and private schools, would not be required to write the examination but would undertake a number of in-service professional training programmes to upgrade themselves to enable them to obtain the licence.She, therefore, asked teachers already in the classroom to disregard social media reports that those already teaching would be sacked because they did not have the licence.Why the licensure examsDr Mrs Oduro explained that the rationale behind the licensure examination was not to prevent people from getting employment, as was being expressed by some students in the colleges of education.“The examination is to ensure that we have quality teachers to teach our children and raise the standard of teaching in Ghana. It will also prepare Ghanaian teachers to be accepted globally,” she explained.Initial resistanceThe licensure examination was initially resisted fiercely by some teacher unions and a section of the newly trained teachers who threatened to hit the streets in protest.While the trainees accused the NTC of devising means to deny them employment, the teacher unions described the timetable for the conduct of the examination as “hastily put together”.However, the NTC strongly dismissed the position of the teacher unions, saying that since 2016, it embarked on sensitisation exercises to educate all stakeholders and the Teacher Trainees Association, Ghana (TTAG) on the examination.The NTC said it engaged with the vice-chancellors and registrars of the universities, the executives of the University Teachers Association of Ghana (UTAG) and the Conference of Heads of Assisted Secondary Schools (CHASS), the Conference of District Directors of Education, among other, on the examination.However, after a meeting with the Minister of Education, Dr Matthew Opoku Prempeh, the unions, which initially expressed their reservations about the examination, later rescinded their decision.Source: Graphiconline