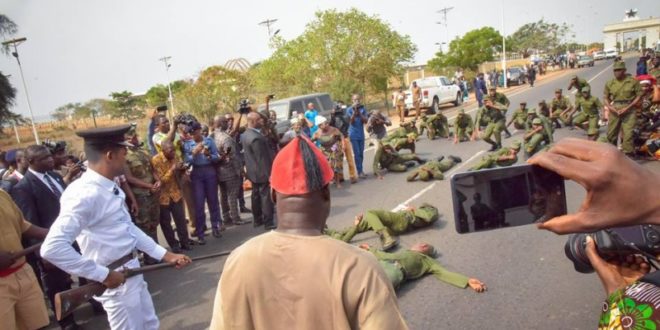 A wreath-laying ceremony has been held today, Thursday, 28 February 2019 at the Nationalism Park, near the Independence Square in Accra, to commemorate the 71st anniversary of the Christiansborg Crossroads shooting incident in 1948, which served as a major catalyst for the struggle of Ghana’s independence.

The ceremony is held every year to honour three unarmed ex-servicemen of the Gold Coast Regiment of the Royal West African Frontier Forces who were killed during a peaceful march when they had gone to present a petition to the then British Governor, Sir Gerald Creasy at the Christiansborg castle.

The shooting incident was re-enacted.

Vice-President Dr Mahamudu Bawumia, relatives of the fallen heroes, chiefs, officers from the security services, schoolchildren, as well as other dignitaries thronged the park to participate in the annual ceremony.

History of the crossroads shooting incident

On 28 February 1948 a number of ex-servicemen marched from Accra to Christiansborg Castle to present a petition to the Governor on their unpaid war benefits. They were, however, intercepted at the crossroads by a contingent of armed policemen.

The contingent, led by British Police Superintendent, Mr Colin Imray, ordered that they disperse and when they refused to obey, he gave an order to the police to open fire and the three ex-servicemen were killed.

The ex-soldiers had fought alongside the allied forces in the Gold Coast Regiment of the Royal West African Frontier Force during the Second World War and had returned home poor and their gratuity had not been paid.After several appeals to the colonial government had fallen on deaf ears, the ex-servicemen decided to march.Source: Ghana/ClassFMonline.com