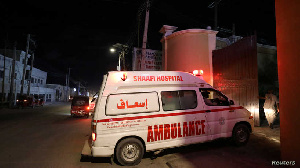 Somali Security forces have shot to death five attackers who officials said were behind a raid Tuesday evening on an upscale hotel near the presidential palace, officials said.

At least five people were killed in the attack and scores rescued, officials said.

Among those killed is a former judge and three security personnel who died during the firefight with the militants.

Somali government spokesman Ismael Mukhtar Omar confirmed on Twitter that all five suspects were killed and the operation is “concluded.”

The standoff lasted seven hours as security forces engaged the militants inside the two-story hotel. It’s the third time militants have raided the same hotel in recent years.

Abdirahman Omar Jeeni-Qaar, former commander of the Somali army’s special forces, was at the hotel when the militants opened fire. He told VOA that about five assailants arrived at the hotel on foot just before 7 p.m. local time. Some of the militants fired on security forces guarding the nearby presidential palace, presumably as a distraction while others entered the hotel, he said.
Jeeni-Qaar said he saw two of the attackers wearing the uniform of the Somali security forces. He said they fired small arms and threw hand grenades.

He told VOA Somali that his bodyguards saved him and other guests at the hotel.

Al-Shabab claimed responsibility for the attack, and said it was carried out by the suicide infantry known as Inqimasi.

Meanwhile, the U.S. military reported carrying out an airstrike near the town of Saakow in Middle Jubba region Monday, killing one al-Shabab militant. The strike brings the number of U.S. airstrikes in Somalia this year to 59.