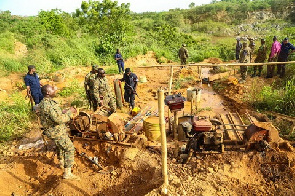 47 Nigeriens and Burkinabes arrested for galamsey

Forty-Seven (47) Nigeriens and Burkinabes have been arrested in a joint operation by Operation Vanguard Taskforce and the Kwarbeng Police in the Eastern Region.

The suspects were arrested at Asamama in the Atiwa West District.

The latest is the highest arrest involving Foreign Nationals in the region after a similar arrest in 2017, which involved 26 foreigners.

In August 2017, the Koforidua Circuit Court ‘B’ Presided over by Her Honour Mercy Adei Kotei on convicted these foreign nationals mostly Nigeriens arrested in the Atewa Forest Reserve engaging in illegal mining to a total fine of GHC15,690,000 in default serve 139 years.

Three other Ghanaians accomplices were convicted to fine of GHC30,000 each in default serve three years imprisonment after they were all found guilty of charges of conspiracy to commit crime, illegal mining and mining without license.