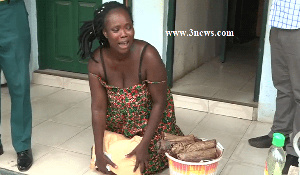 A 42-year-old woman has been arrested at Asikuma in the Oti Region for allegedly making a fake baby bump out of slabs of compressed dried leaves which immigration officials suspected to be Indian hemp.

Mavis Adubea who is from Nkonya, is said to be a businesswoman who plies her trade in Takoradi.

Immigration officials are said to have profiled the woman who they suspected to be dealing in narcotic drugs over the years.

At about 8:00 p.m. Sunday, she arrived at the Asikuma Inland Checkpoint with what looked like a baby bump as she portrayed herself as a pregnant woman.

Immigration officials suspected her pregnancy to be fake and upon body search, it emerged the ‘pregnancy’ was rather a concealment of three slabs of the compressed substance.

Adubea was said to be traveling from Kpando to Accra when she was arrested. She has since been handed over to the Police at Ho in the Volta Region for further interrogation and possible prosecution.

The Deputy commissioner of Immigration in – charge of Volta Region, Clava Nantuo commended the officers for a good job done, describing them as real professionals and patriotic officers who are ready to go the extra miles for mother Ghana

He warned persons engaged in such criminal activities in the area to cease as security personnel are at all times on alert at the various checkpoints.