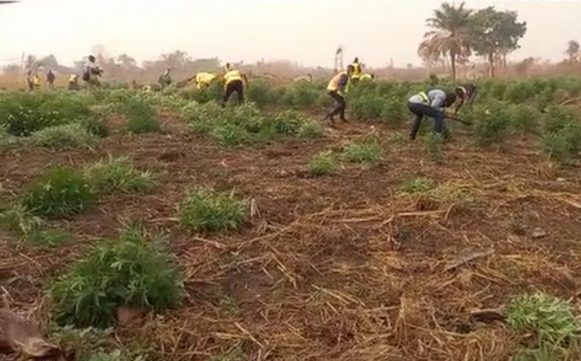 4 including pregnant woman arrested for cultivating cannabis in Volta Region

A pregnant woman, a nursing mother, and two others have been arrested while working on a cannabis farm at Liati Dafornu in the Afadjato South District of the Volta Region.

As part of a joint operation led by personnel of the Narcotics Control Commission ( NACOC), with support from the Immigration Service and the police, about 40 acres of cannabis farms were destroyed.

Speaking to the media, the Head of Communications of NACOC, Francis Opoku Amoah, said his outfit will roll out more intelligence-based operations to fight the cultivation, production, and usage of illicit substances.

The operation, which has been ongoing for some days, has seen the arrest of four persons; a man and three women. One of the women was a pregnant woman, and the other a nursing mother.

“Unfortunately, for those 16 and 18 year-olds, one is a lactating mother, and the other is a pregnant woman. Those people are currently with the Hohoe Divisional Police,” he said.

“Cultivating cannabis is still illegal in our country, and therefore if you engage in it, you are engaging in illegal activity and the law will catch up with you… This is one of the largest.

“We can say that we’ve done more than six different farms and each farm could be more than six acres, so we are looking at a lot of acres that people have decided that instead of cultivating food for our country, they will use it for illegal activity,” he added.

The farms were subsequently cleared and burnt.