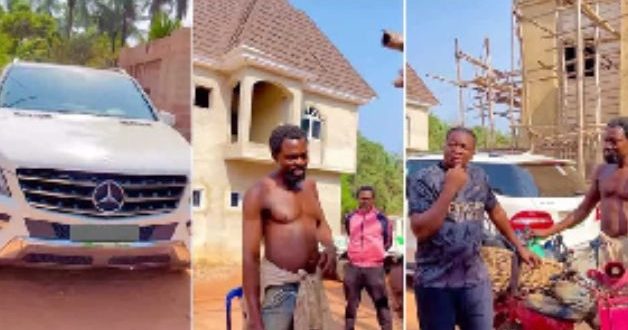 The tweet was made by @Postsubman and showed pictures of the palm wine tapper posing with his car in front of his house.

Several Internet users were shocked when they saw the post and wrote their thoughts in the comments section.

The story of how a 37-year-old palm wine tapper named Utobo built a two-story mansion and bought a Mercedes Benz has broken the internet and left many people speechless. The Twitter account @Postsubman shared the post, which showed a man posing in front of his house and showing off his white Mercedes-Benz.

Utobo said in an interview that he worked hard as a palm wine tapper because he had two houses and a Mercedez Benz. Utobo also said that he climbs 53 palm trees three times a day for 19 of the 24 hours in a day.

The middle-aged man said that he can make 24 gallons of palm wine every day, which he sells at the market. Utobo also said that he helped pay for his wife’s college education by running the same palm wine business.