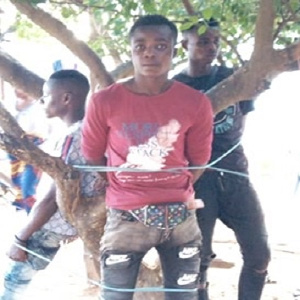 Three young men, Jelil, Abdalah and Alhaji Adam were on Wednesday night tied standing to a tree at Yagbon Residential Area, a suburb of Damongo in the West Gonja Municipality till morning for stealing a goat.

The youth of the area said stealing at the community has reached alarming levels hence their action.

Akilu Gideon of PAD FM who was at the scene when the three were being sent to the Damongo police station on Thursday morning reported that the three were undressed leaving only their boxer shorts as they walked them through the principal streets of the town to the police.

He said, according to the youth, the thieves confessed that two of them stole a goat and fled on a motorbike three days ago, but were seen by the third suspect as they fled.

The third guy called his colleagues and demanded a share of the proceeds of the stolen goat to keep quiet, but days after following up for his share without success, he decided to break into their room on Thursday dawn ostensibly to pick something as a replacement but was apprehended by a young man in the house.

After questioning, he confessed the crime saying he was only looking for his friends to collect his share and just as the youth in the area were planning what to do with him, his partners arrived and were also apprehended.

Listeners who phoned into the PAD FM Kariyankye super morning show demanded the thieves be punished by the police to serve as a deterrent to others.

This they say will reduce the rising incidence of steeling in the Savannah regional capital.

Previous Covid-19 travel alert: UK excludes South Africa from quarantine-free list
Next Many gov’t officials have not taken their leaves since 2017, why come for me? – Domelevo asks Akufo-Addo