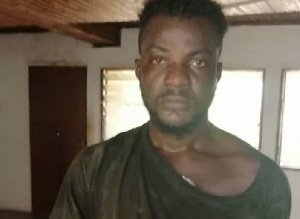 The Dansoman Police Command has arrested a 25-year-old man, Prosper Nii Aku, who is suspected to have killed a 40-year-old woman.

According to the police report, the lady is believed to be a prostitute who was picked up by Nii Aku at about 11 pm last Wednesday evening to his apartment in Karikari Brobbey a suburb Dansoman.

Police say the patrol team received a distress call to the effect that someone had murdered another in an apartment at Karikari Brobbey a suburb of Accra at about 2 am Thursday morning.

“Police surrounded the house and after 30-minutes the suspect jumped from the top floor unto the ground in a bid to escape but he was arrested.

“Police forced the door opened and found a female dead body aged about 40-years. She was lying naked in a supine position in a pool of blood, at the back balcony of the top floor with bloodstains all over the top floor, and multiple wounds and cuts on the face, eyes and the ears”

“He dug a hole in an attempt to bury the decease but he couldn’t dig deep because of the concrete floor and that gave him out,” a police source told The Ghana Report.

Nii Aku, according to the police investigations, has denied killing the deceased.

The deceased is yet to be identified but the body has been deposited at the Police Hospital Mortuary for preservation and autopsy.