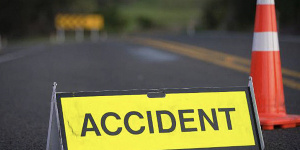 A police officer involved in a car chase with a commercial driver has reportedly run into some bystanders killing one in the process.

According to a report by myjoyonline.com, the police officer who was driving a Toyota Vitz Taxi with registration number GX 6051 – 21 was chasing an errant trotro driver.

The officer who was said to be driving on top speed veered off the road after running over a speed rump and run unto the pavement along the road.

The incident, which happened at Atico junction near Kaneshie, saw the officer knock down three persons crushing one of them to death. The remaining two are said to have sustained various degrees of injuries.

“The policeman was pursuing a trotro driver on top speed using the inner road. There’s a small speed ramp over there, I think that is what led him to veer from inner road, climb the pavement, hit one person on the pavement, hit another one on the outer road before the last lady.

“The lady saw the car coming but she couldn’t dodge or run away and the car hit her into the three. Her body was torn into pieces,” an eyewitness gave his account of the accident.

The Officer in Charge of the Motor Transport and Traffic Directorate (MTTD) at Odorkor, ASP Kingsley Kanda, has confirmed the incident indicating that investigation has commenced into the accident.

He further confirmed the identity of the driver as a police officer but failed to give further details about his identity.

Meanwhile residents in the area have expressed disappointment in the actions of the police officer.

“You can’t use a commercial vehicle on a top speed to do this. If it were a patrol car, I am sure the trotro driver would have stopped. But you sit in a taxi and drive at such a speed, that is unfortunate,” a resident noted.

Atubiga hospitalized after a car accident