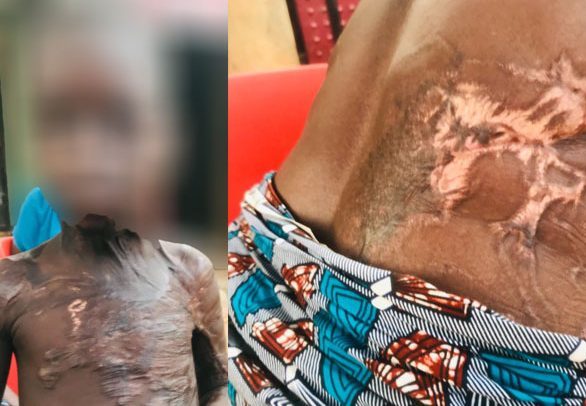 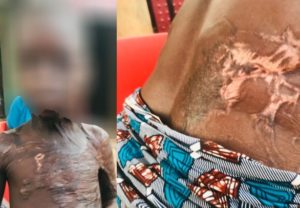 Madam Zakaria Asana and her seven-year-old granddaughter, Sulemana Hadija are seeking justice after they were attacked by a neighbour with acid over witchcraft allegation.

In 2019, the suspect, Afa Issah, poured acid on the seven-year-old girl and her grandmother when they were asleep at night at Katariga in the Northern Region.

Issah was subsequently arrested and arraigned before the Circuit Court in Tamale and later granted bail.

The acid attack burnt the little girl’s face, chest, while the grandmother sustained various degrees of injuries on the hand, stomach, and other parts of the body.

The little girl had to undergo about five surgeries and according to the family, doctors are saying the little girl might not be able to develop breast due to the acid burns on her chest, unless she undergoes further surgeries.

The little girl told daily guide that when she was discharged from the hospital, her friends were afraid to come closer to her due to the scars on her body.

“My friends were running away when they saw me after we came back home which made me feel bad as if I am not a human being again,” she disclosed.

The little girl had to stop school for over a year until she recovered.

In an exclusive interview with daily guide, Madam Zakaria Asana said the suspect accused her of being a witch and that she attempted to poison his foodstuff.

According to her, the issue was reported at the chief’s palace but the suspect could not prove his allegation and was warned by the chief to desist from accusing her of being a witch but that did not stop him from attacking them with the acid.

She told daily guide that they still feel pains all over their bodies and that they face difficulties sleeping at night.

“As I am talking to you now, it feels like my back has been hit with a metal because I continuously feel pains all over my body and the pain is unbearable.

“All we need is justice to be served to myself and my granddaughter. The suspect should be rearrested to face the law.”

She appealed to the court to recall the case after it was put on hold due to COVID-19, for the process to continue.

Mr. Alhassan Zakaria, the victim’s son told daily guide that the family has spent close to GH¢9,000.00 on surgeries and medical bills throughout their stay in the hospital and that they are still paying for other medical services.

“Even till now we are still spending money to buy them some medicines and we are expected to go back to the hospital for some surgeries again,” he disclosed.

Mr. Zakaria indicated that when the suspect was arrested and arraigned before the Tamale Magistrate Court, the case was suspended due to COVID-19 restrictions, but to date, they have not been called for the case to continue.

“They told us to wait until the COVID-19 is over but now the courts are working and they haven’t called us or told us anything about when the case will be called and now the suspect is walking about freely and has relocated to a different area,” he explained.

He, therefore, called on the police and the court to recall the case to ensure that justice is served to the family and the suspect prosecuted to serve as a deterrent for people who forcibly accuse others of witchcraft and hurting them without any evidence.

“If not because we are law-abiding citizens I could have taken the law into my own hands and dealt with the suspect myself but we want the court to grant us the justice that’s why we are in court,” he added.

When daily guide contacted Mr. Salia Abdul-Quddus, the Northern Regional Chief State Attorney about why the case has since not been recalled, he indicated that the prosecutor of the case handed the docket over to another prosecutor when he was reassigned to the District Court.

He also noted that some evidence has been led by the prosecution and that the judge who was in charge of the case has been transferred, adding that a new judge is yet to commence hearing of the matter.