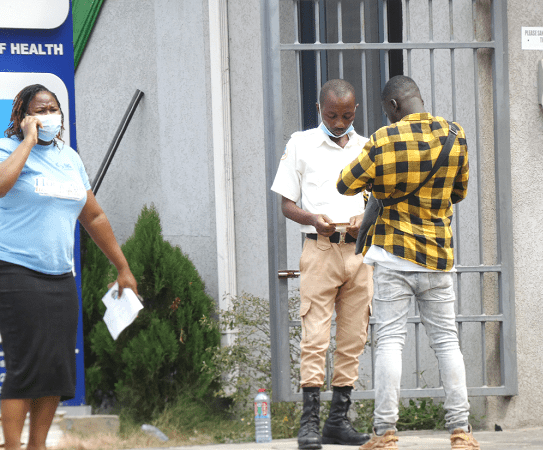 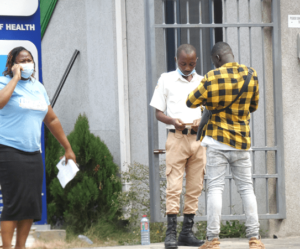 A number of people who showed up at the offices of the Ministry of Health (MoH) on Monday without proof of having been vaccinated against the coronavirus disease (COVID-19) pandemic were turned away, as the ministry’s ‘no vaccination, no entry policy’ directive took effect from January 4, 2022.

The move is in accordance with the directive issued by the Minister of Health, Mr Kwaku Agyeman-Manu, instructing all government organizations to allow entry onto their premises for only vaccinated people.

As the government agency at the forefront of health delivery, the MoH has led by example and started enforcing the new policy.

At the entrance of the MoH Head Office, there was a big notice: No vaccination, no entry, posted next to another that warned: No mask, no entry.

As early as 7:30 a.m. yesterday, security persons had begun checking the vaccination cards of both staff and visitors who were either reporting for work or to do business.

The Daily Graphic observed that apart from the vaccination cards, the security persons were also verifying with other forms of identity cards to verify the bearers’ real identities.

Even journalists who had called at the ministry to follow up on the exercise had to show their vaccination cards or were turned away in the case of those who could not provide their cards.

A security officer who spoke with the Daily Graphic said: “We are checking everyone, including our staff. If the minister reports to work today, his card will also be checked. It is the process here and everyone who comes here must go through it.”

Asked if he and his colleagues had their vaccination cards, the security man answered in the affirmative and pulled his out of his pocket as proof.

A handful of people looked stranded at the entrance of the ministry’s building, as they were prevented by the security from entering to conduct their business because they had no idea of the new directive and so did not have their vaccination cards on them.

A staff member who had attempted entry without a vaccination card, claiming he had left it at home, was disallowed from entering by the security.

A few people who had traveled from outside Accra to transact one business or another at the MoH were turned away, as they could not provide their cards.

“I traveled from Akyem Oda and did not know that there was this policy. I have taken the vaccine but didn’t know I had to bring my card along. I tried to convince them that I had taken the vaccination, but they would not listen to me so I have to return and come back another time to do what I wanted to do today,” Emelia Sarpong said.

A young man who was visibly upset for being turned away said there should have been enough notice about the directive before it was implemented.

“How can this take off just a day after the holidays, without enough notice? I have come all the way from Suhum, only to be told that without the card I cannot enter to complete the reason for being here. This is not fair and we have to learn to communicate properly,” the man said, refusing to give his name.

Some people who supported the directive were happy that it was being implemented, as it would help improve the vaccination situation in the country and help in the fight against the pandemic.

“We want to have our normal lives back, and that can only be done if we are all protected. It is unfair that some of us will be responsible and others choose not to and they end up infecting us or keeping the pandemic raging. This will compel many people to get the jabs,” Cecilia Agyapong said.

Kow Ansah Kesse said while he welcomed the action, he hoped that it would not be a nine-day wonder but will be carried out as diligently as he had witnessed on the first day.

“I sincerely hope that this will last as long as it should. We all saw what happened with the no mask, no entry policy. If those inspecting will do their work well, and we as citizens will also cooperate, we will all help in the fight against COVID-19,” he said.

This new policy by the MoH is an attempt by the government to curb the recent surge in COVID-19 infections and also an attempt to vaccinate 20 million people in order to reach herd immunity.

Explaining the directive to the Daily Graphic, Mr Agyeman-Manu said as the government agency at the forefront of health delivery, it was critical that the MoH led by example.

“Effective Tuesday, January 4, 2022, everybody entering the MoH building must be vaccinated before he or she is admitted. Valid vaccination cards will be, therefore, required for entry,” he said.

He said very soon the date on which the vaccine mandatory protocols would come into effect would be announced and called on all stakeholders, particularly the media, to be advocates, defenders, and supporters of the protocols because they were being introduced solely in the interest of public health.

Mr Agyeman-Manu further indicated that the ministry was doing all it could to ensure that at least 20 million people, required to reach herd immunity, were covered in the vaccination exercise.

He said the policy for mandatory vaccination was expected to start with selected groups of people, including all workers in government institutions, all commercial drivers, and patrons of selected events.

Others were members of the three arms of government, all healthcare workers, all security personnel, and all students and staff of secondary and tertiary institutions, he said.

“These people were those given priority even when the country had only a few vaccines, and so we expect all of them to be vaccinated,” he said.

Ahead of the coming into force of the extended implementation to other government and public agencies and ministries, a number of the agencies have put up no vaccination, no entry notices at their entry points.

Some of the agencies where the Daily Graphic observed the notices were the Ministry of Food and Agriculture and the Ghana Health Service.

Here are the 9 highways, 7 bridges, 5 interchanges govt is working on this year