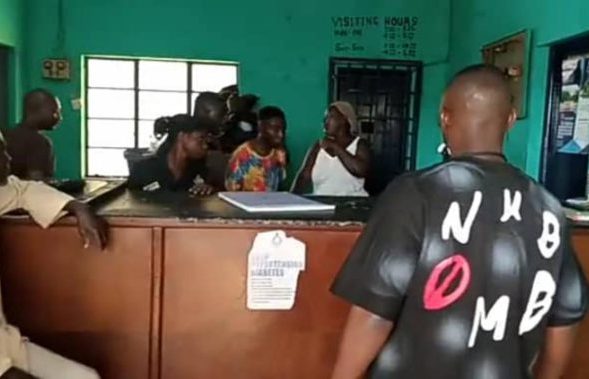 There was a drama at the Damongo divisional Police station in the Savannah Region when a 34-year-old suspect absconded from the grip of the Police officer who had arrested him.

Destiny Aziz took to his heels amidst shouts from onlookers for him to be rearrested.

Even before the Police could take down his statement, the suspect bolted.

However, luck eluded him when some youth in the town joined the Police to recapture him.

Recounting the incident to JoyNews’, Iddrisu Abdulia, the owner of the stolen motorbike, said the suspect visited his shop near Yagbomwura’s Palace to buy a plastic bag.

“He came, and he sat by the shop where my motorbike parked. He said he wanted to buy a plastic bag but, interestingly, later said the one he wanted wasn’t part of those available.

“Then, he turned to go and came back and saw a bag on the floor which he said he needed so I gave it to him.

“Then he left and returned for the third time and asked if I had sachet water in the fridge, which I gave again, and also, he needed a box of matches which he paid for though,” he said.

The victim said he had forgotten that the motorbike key was left hanging on it, so “the suspect made for the Mahama guest house. Unknowingly, after he entered the guest house, he passed through the cemetery road and back to my shop to steal the motorbike.”

Mr Abdulai said he was inside his store when he heard the sound of his motorbike and rushed out only to see the suspect speeding off with it.

“I shouted for him to stop because I didn’t know he was even the one. The people around gave him a hot chase, and he finally fell into a gutter and was arrested and handed over to the Police,” the victim said.

The Police are investigating the matter and will process the suspect for court.