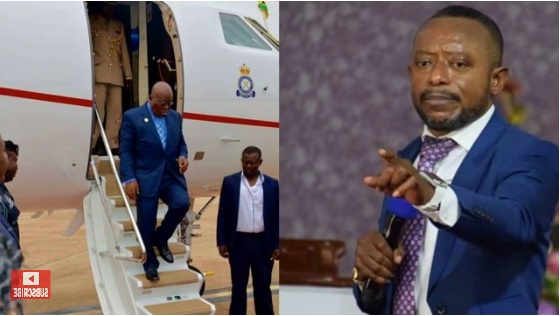 Prophet Isaac Owusu Bempah has revealed a doom revelation he saw about the President of Ghana and what he did to avert it.

The man of God in the 31st Night Service talked about what prophets and prophecies have done for the country despite the attack in the Prophetic Ministry.

The man of God talked about how he saw a revelation about President Akufo-Addo dying in a plane crash.

According to Prophet Owusu Bempah one day he saw the President in a plane with other people and the plane crashed with no one surviving.

After seeing this revelation, he went straight to the NPP headquarters where he saw the chairman, Frederick Blay.

He told him about what he’s seen and strangely a Muslim who was seated with the NPP chairman said he’s also been having nightmares about the President having a Omane crash whenever the President is out of the country.

To avert this doom revelation, they gathered a good numbers of NPP people at the Party’s headquarters for two days of fasting and prayers.

In two weeks time the President traveled to the United Kingdom and when his plane took off, the engine of the plane caught fire.

Watch The Video Below:

Bawumia is the kind of leader Africa needs — Emir of Kano