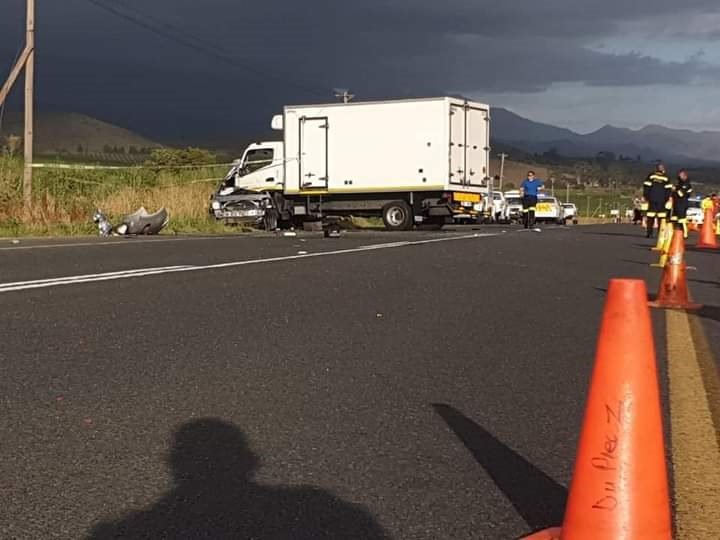 Five people have died in an accident on the R60 in between Worcester and Robertson in the Western Cape.

Five women have died in a crash on the R60 between Worcester and Robertson in the Western Cape.

The collision took place at around 15:00 on Thursday, between a Toyota Yaris and a truck.

Western Cape Transport and Public Works MEC Daylin Mitchell said preliminary investigations suggest that the driver of the Toyota made a u-turn in front of the truck, resulting in it crashing into the Toyota.

The five occupants of the Toyota died at the scene. Five people have died in an accident on the R60 in between Worcester and Robertson in the Western Cape.
News24

He confirmed that five women, aged between 21 and 24, were fatally injured. Two men, aged 25 and 30, were injured.

“The injured victims were taken to a nearby medical facility for treatment. A culpable homicide case was opened for further investigation. The deceased were all in a silver Toyota Yaris,” said Van Wyk.

The injured men were in a Mitsubishi Fuso truck.

“Anyone with any information about this fatal accident is kindly requested to contact Crime Stop on 08600 10111,” added Van Wyk.

There has been an outpouring of grief on social media, mourning the women.

Moses and Peters were softball players for the Table View Tornados Softball team.

“Cape Town softball has been rocked with tragic news,” the club said in a social media post. “We are all in mourning, these young souls taken away are part of our softball family and we are heartbroken by this.”

Mitchell added: “I urge all road users to be extra vigilant as traffic volumes increase ahead of the New Year’s weekend. Please ensure that you only overtake and turn where it is lawful and absolutely safe to do so. Increase your following distance and never exceed the indicated speed limit.”

Prophets that die in 2021: Tutu, TB Joshua, Adeboye plus other top priests