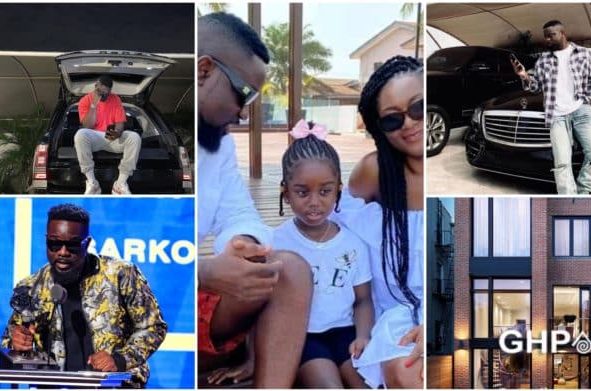 Sarkodie is a Tema-based Ghanaian rapper and entrepreneur who has received several striking international acclaims.

He has garnered multiple awards for his contributions to the Ghanaian music industry from various recognized awarding bodies both locally and internationally.

Sarkodie whose official name is Michael Owusu Addo was born in Koforidua, Ghana, on July 10, 1988. He is the fourth of five children to Mr. and Mrs. Owusu Addo.

Aside from being an exceptional rapper, King Sark as affectionately called is also an education enthusiast.

The rapper had both his primary and JHS education at one of the Montessori schools in Tema.

After passing out with flying colors at the basic level, he enrolled at Tema Methodist High School where he received his Senior School Certificate and later got admission at IPMC to study graphic design.

Sarkodie has once confessed that he used to rap whiles he was still in school during entertainment and funfairs.

Sarkodie has been rapping since he was a child. He understood what he wanted out of life from the age of four and was not scared to pursue it.

However, he cemented his relevancy in the music industry on a rap show called Kasahare Level on Adom FM which officially established his music career.

Luckily for Sarkodie, Duncan Williams who was the show’s host took a special interest in his exceptional talent and eventually became his manager after the radio contest.

He met Edem and Castro while on the show and they introduced him to Hammer of The Last Two, a well-known and superb record producer.

Hammer was so impressed with Sarkodie that he had no choice but to let him record two tracks for Edem’s debut album.

Meet new boyfriend of Sister Derby who looks like Medikal