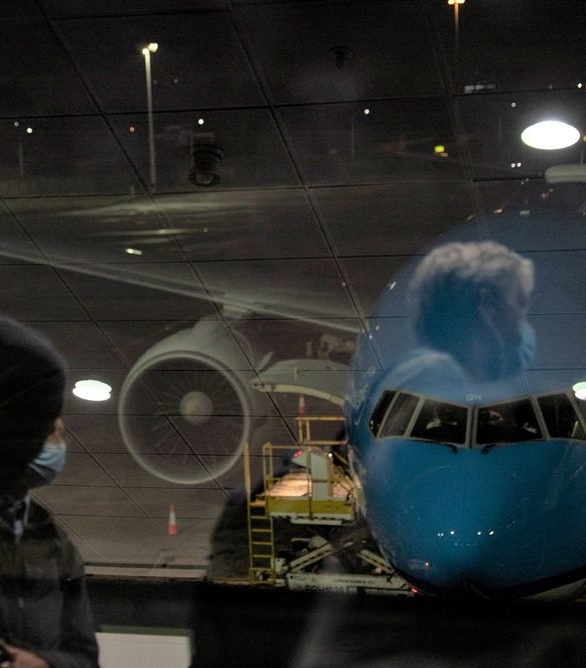 Grandmother Rosemary Chambers could not hold back the tears on Friday when she learnt that she would once again have to cancel her trip to see her family after several European countries put South Africa on their red list following the discovery of a new Covid-19 variant.

“It felt like I had been punched in the face and kicked in the stomach when I heard that yet again, we had been put on the red list and that my travel plans were to be put on hold. I could not hold back the tears and the guttural sounds that came from within were unbelievable. I thought I was going to collapse,” she said.

Her son and his family relocated from South Africa almost two years ago. She said that although she was gutted, she knew that she was going to be able to see them soon.

She and her grandson had been counting down the calendar days till they were reunited, after she had to cancel her previous trip in September when South Africa was put on the red list.

I went as soon as possible to be vaccinated regardless of all the concerns about the newness of it, just to make sure that I was able to go to see them, but the rug was pulled from under my feet again when we were not removed from the red list. So, with a brave face and a heavy heart I set my mind on December and again made the necessary plans

She said the day she was able to, she booked a ticket and everyone was celebrating.

“My grandson was keeping a calendar on his side whilst I had the identical on my side and each day, we checked in on how many sleeps,” she said.

Several countries and regions instituted travel restrictions and cancelled flights since the announcement of the new Omicron variant.

South African scientists announced the new variant on Thursday, after it was traced during genome sequencing.

Travel restrictions had been imposed by the UK, US, EU, Canada, Turkey, Sri Lanka, Oman, UAE, Australia, Japan, Thailand, Mauritius, Seychelles, Brazil and Guatemala, among others.

Following the announcements, scores of South Africans were either left stranded in other countries or many would no longer be able to visit their families abroad for Christmas.

Many reached out to News24 to share their frustrations.

In Paris, Melvi Todd and her family have had to fork out an additional R33 000 to book a flight with another airline after Emirates cancelled their flight. Passengers reflections are seen in a window in the international departure terminal at the OR Tambo International Airport in Johannesburg on November 27, 2021.
AFP (Photo by Dimitri KORCZAK / AFP)

They are now waiting with baited breath to see if they will be able to get on that flight and return home.

The Todds were in France because Melvi’s husband, a lecturer at Stellenbosch Business School, was teaching a course on Climate Economics in Clermont-Ferrand.

Their attempts to contact Emirates and try find a way home had proved fruitless.

From where we are viewing this, being fully vaccinated and holding our negative PCR tests in hand at CDG… This is all just another form of colonialism… The developed world deciding what’s good for the rest of us… Applying double standards. How does anyone even know it’s not them that brought the new variant to us. We just have shit hot, transparent scientists.

“Being a scientist myself, I commend them for their work and their transparency… Despite the upheaval it cost us and other South Africans across the globe. Shame on those who made snap judgements and shut us out, despite our tests and our vaccines. WTF did we bother with those for? To make big pharma rich, ” she added.

Mother Sarojini Naidoo broke down on Friday when she realised that she would not be able to see her son who lives in the UK, for Christmas.

“I cried and cried. My heart was broken. My only son lives in the UK. I lost my sister to cancer in April. Thank God he was able to come down for the funeral. He was like a son to her, very attached. He had to go into quarantine when he  returned to the UK. It wasn’t a good experience especially after losing a loved one. We both were trying to deal with my sister’s passing and the distance didn’t help,” she said.

Naidoo said that the treatment South Africa was getting from European countries was harsh.

“My heart goes out to every family affected by this ban and to that mum who now can’t be with her daughter whose scheduled for major surgery. Heartbroken, but keeping my hope alive in the Lord,” she said.

2021 has been a difficult year for Penny and her family after her husband died of a heart attack in February, less then two months after they had relocated to the UK. She was looking forward to spending Christmas with her daughter for the first time since 2014. “This year has been extremely difficult and we were so looking forward to my other daughter and her boyfriend in South Africa joining us for Christmas.

She was meant to arrive on 11 December and we were last altogether for Christmas in 2014,” she said.

“There are no words to describe the disappointment. We are all fully vaccinated and are praying that this new variant is not as severe as anticipated and that Boris [Johnson] will review his decision favourably,” she added.

On Sunday, President Cyril Ramaphosa called out nations for putting South Africa on the red list

“We are deeply disappointed by the decision of several countries to prohibit travel from a number of southern African countries following the identification of the Omicron variant. This is a clear and completely unjustified departure from the commitment that many of these countries made at the meeting of #G20 countries in Rome last month,” he said.

4 top Nigerian business magnates and how they made their wealth