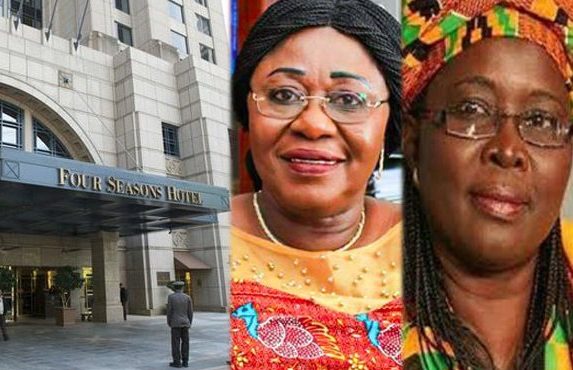 The office of the Chief of Staff, has ordered the Bank of Ghana (BoG) to make a wire transfer of seventy-three thousand, three hundred and ninety-five United States dollars (US$73,395.00) into the account of Ghana’s Embassy in the US, at a time the government is pursuing people on Mobile Money transactions to fork out a whopping 1.75percent as tax.

The amount is to take care of President Akufo-Addo’s scheduled stay at the Four Seasons Hotel in Atlanta, the United States of America from Monday, November 29, 2021, to December 2, 2021.

Correspondents on the trip from the Ghana’s Embassy in the US, the Four Seasons Hotel and Chief of Staff, Madam Akosua Frema Osei-Opare, did not mention the purpose of President Akufo-Addo’s trip.

Its comes at a time that the Finance Ministry, was unable to arrange a paltry GHC300, 000 for District Assemblies Common Fund (DACF), Ghana Education Trust Fund (GETFUND) and the National Health Insurance Fund (NHIF) forcing the Members of Parliament (MPs), including the Speaker of Parliament, to hold Ken Ofori-Atta hostage last week, until he made some undertaken to settle the statutory payments which have ran into arrears since last year.

The Herald’s information was that the embarrassing issue led to Access Bank, being called in to give a loan of GHC300, 000.00 to the government to cool down the MPs.

Shockingly, the Nigerian bank, was only able to raise a paltry GH¢200, 000 to the DACF before the lawmakers allowed Mr Ofori-Atta into the chamber to read the budget

This newspaper learnt that, “only the fourth quarter of last year was released this year”. Yet President Akufo-Addo hardly stays in the country these days as he is constantly abroad flying on a rented luxurious jet and sleeping in expensive hotels at the expense of Ghanaian taxpayers.

Sharing letters of correspondence between the hotel, the Embassy of Ghana in the United States and the Office of the President, opposition Member of Parliament for South Dayi, Rockson-Nelson Dafeamekpor, pointed out how government is willing to spend such an amount on the president’s hotel bills, while imposing new levies on the taxpayer to raise more revenue.

Also included in the list of correspondence shared by the MP in his post, is a letter from the office of the Chief of Staff, requesting the Bank of Ghana, to make a wire transfer of seventy-three thousand, three hundred and ninety-five United States dollars (US$73,395.00) into the account of Ghana’s Embassy the US.

The money, according to the letter dated November 2, 2021, and signed by the Chief of Staff, Frema Akosua Opare, is to be used for the payment of hotel reservation for the president and his delegation for a period of four days (November 29 to December 2, 2021).

The Chief of Staff was responding to a November 1, 2021 letter from Ghana’s Ambassador to the US, Hajia Alima Mahama, to release the money to take care of the President’s hotel accommodation inside the  Four Seasons Hotel, while in Atlanta – Georgia.

The rates for rooms reserved for the president and his delegation, ranges from US$400 to US$8,000 a night.

On the non-payment of the statutory funds, The Herald is informed that the Leadership of Parliament had briefed the Speaker, Alban Bagbin on the non-release of the DACF, GETFund and the NHIF for the entire 2021 financial year.

“Only the fourth quarter of last year was released this year.  So the MMDAs, have been without funds for the whole year”.

The Speaker got in touch with the Minister of Finance, who assured him the funds, would be released before the budget day, however, a day before the budget presentation, the leadership of Parliament invited the Deputy Minister to update them on the issue.

The Deputy Minister informed them that, GHC300,000.00, had been released by the MoF to the DACF Administrator.

After the brief, one member of the leadership rushed to the Office of the DACF to ascertain the truthfulness of the information. There he met officials from Access Bank negotiating with the Administrator of the DACF, the terms of a loan of GHC200,000.00 to the DACF.

The leader was shocked. He then proceeded to inform the rest of the leadership of Parliament.

This was placed before the Speaker at the pre-budget plenary sitting in the lobby in Parliament.

The Speaker summoned the Ministers and their Deputies to explain to him what had happened.

They admitted after much difficulty that the DACF administrator was written to borrow GHC300,000.00 from the Access bank at negotiated terms of payment on the books of the Fund. Access Bank revealed it could only provide GHC200,000.00.

This meant the Administrator of DACF, would have to source the balance of GHC100,000.00 from a different financial institution. Clearly, the Deputy Minister of Finance, had misled the leadership of Parliament.

According to the leaders, the MPs weren’t happy and had taken a stand to disrupt the presentation of the Budget statement. But the Speaker wouldn’t tolerate any such thing on the floor of Parliament.

“Since the Deputy Minister had misinformed the leaders, it was inadvisable to take the word of MrOfori-Atta that the Ministry will release the Funds as an assurance. It took a lot of haggling before we settled the matter with the Minister swearing to release the Funds by a certain date”, said one individual familiar with the issue.

After Ken Ofori-Atta’s pleadings, the Speaker is reported to have prevailed on the leaders to beg their members to lower their guns for a smooth presentation of the Budget statement.

It was after this, that Ken Ofori-Atta, was allowed to walk into the House to present the 2021 Budget Statement and Economic Policy.

“I think all objective observers of the proceedings of that day will admit that the sitting was one of the most decorous budget presentations in the history of the Fourth Republican Parliament”, said another official familiar with Mr. Ofori-Atta’s hostage.

The 1.75percent tax on electronic financial transactions was proposed in the 2022 budget presented to Parliament by the Finance Minister, on Wednesday, November 17, 2021.

The Minister explained that the tax measure was to raise revenue to support job creation initiatives, construction of road infrastructure, cybersecurity, and digital infrastructure.