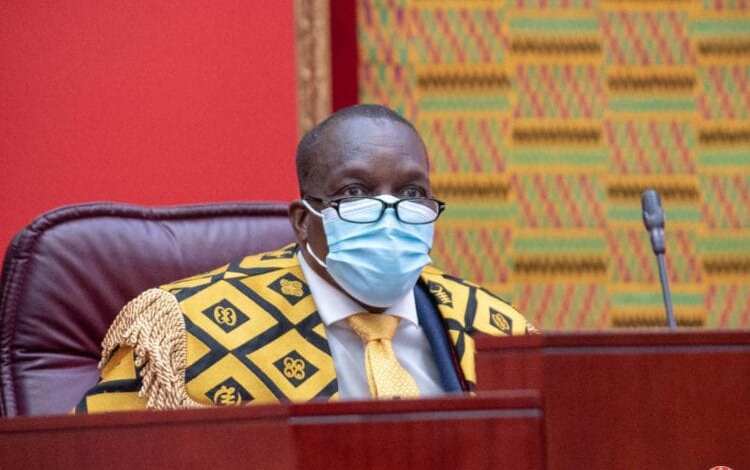 138 MPs were present in parliament during budget voting, says Speaker

The head of Law Centres at the Faculty of Law, Ghana Institute of Management and Public Administration (GIMPA), Dr Kwaku Agyeman-Budu, has said that the Speaker of Parliament, Alban Bagbin could serve a jail term of 10 years if he is found guilty of overseeing the rejection of the 2022 Budget, contrary to the provisions of the 1992 Constitution.

This comment comes on the back of concerns by majority members over what they described as the unconstitutionality associated with a vote purportedly rejecting the 2022 Budget as presented by Finance Minister Ken Ofori-Atta on November 17, 2021.

“I think that, there is that issue of constitutionality that could be determined by the Supreme Court, and if you read article 2 of the constitution for instance, a citizen of Ghana can bring an action in the Supreme Court where you believe that any person has acted or omitted to act in a way that is inconsistent with or in contravention of the Constitution or any provision thereof,” he said.

“And if you read closely Article 2, you will find out that the Supreme Court has the power to declare any such act of any person unconstitutional or inconsistent with the provision of the Constitution and they have the power to make consequential orders to give effect to that particular declaration or decision that they will make.”

“To the extent that all those persons to whom such orders of the Supreme Court are directed are bound by the Constitution to obey the orders of the Supreme Court or risk being convicted for what is referred to as high crime under the Constitution; which carries a jail term of ten years and not being able to hold public office for ten years,”Asaase.com quoted

Meanwhile, Speaker of Parliament, Alban Bagbin has said the 2022 budget was lawfully rejected, therefore, the statement by the majority that it was unconstitutional should be disregarded.

He added that at the time the budget was rejected, over 137 Members of Parliament were present.

“Please let it be known that there were more than 137 MPs on the floor when I put the question for the approval or rejection of the Economic Policy and Financial Statement of the government for the 2022 financial year often referred to as the Budget for 2022,” he wrote in a Facebook post.