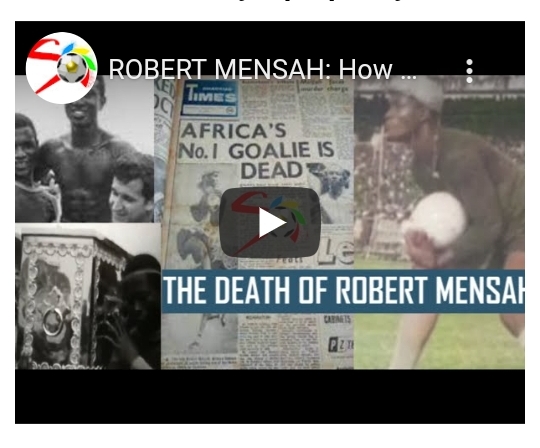 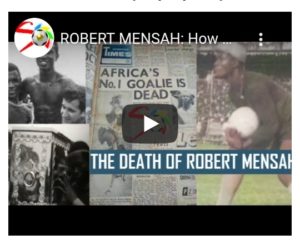 Robert Mensah is regarded as one of Africa’s greatest goalkeepers

It’s been 50 years since Ghana lost one of its legendary goalkeepers, Robert Mensah who died at the Tema General Hospital after he was stabbed with a bottle during a tussle with a friend.

Robert Mensah died at a time when he was expected to be picked up by Rev Osei Kofi who was returning to the country after his successful knee surgery in Europe so that the duo can join their Asante Kotoko teammates in camp.

The Porcupine Warriors at the time were preparing for their African Club Championship semi-final match against Accra Great Olympics on November 7 when Robert Mensah met his untimely death.

According to an eyewitness account, Robert Mensah was stabbed to death at the Credo drinking bar at Tema Community 7 when a fight broke out between one of his friends and a stranger.

But according to Rev. Osei Kofi who was a good friend of the deceased during their playing days in Asante Kotoko, Robert Mensah’s death has a spiritual connection.

Rev. Osei Kofi revealed that a priest prophesized after a visit to the ‘Somakwahene’ that one of them (him and Robert Mensah) will die as a result of the rituals that they have performed.

Read Osei Kofi’s narration in the documentary by Saddick Adams of Angel FM below:

“We lost about three games in a row and Asantehene called me and Robert Mensah that we should go and see the ‘Somakwahene’ for him to fortify us because the club was sinking. So, I went there with Robert and only the two of us can tell what we did there during our stay but when we were leaving the place, I overheard the priest telling the ‘Somakwahene’ that one of us will die as a result of what we have done.”

“We had qualified for Africa that year because we won the Ghana Premier League and the team was preparing in camp in Kumasi but Robert was in his house. I went to abroad to do a knee surgery so when I was coming back home, they sent a driver to come and pick me at the airport so that we will go and pick Robert Mensah because I was the only one, he listens to but I hope you remember the prophecy of the priest who said one of us will die,” Osei Kofi told Saddick Adams.

“My flight delayed so I arrived in Ghana in the evening so when my friend Eddie Bour came to pick me at the airport, he suggested that we wait and go and pick Robert in the morning because we will bot meet him at home because it was midnight. But unfortunately, we went there to hear about his death the following morning because he died at midnight,” he added.

Watch the video below from minute 22

Source: www.ghanaweb.com
Related Topics:ABYCAUSEDDEATHMensah’sPROPHECYRobertWAS
Up Next