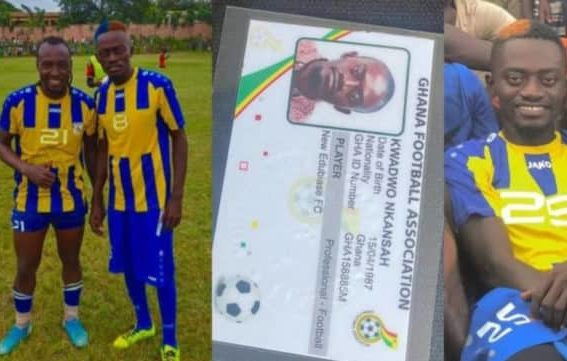 Kwadwo Nkansah Lilwin, a Ghanaian movie star who is now a professional footballer, has lambasted detractors who question his decisions and wins in life.

It can be recalled that on the 16th of October 2021, reports surfaced in the media claiming that the comic actor has signed a player contract with New Edubiase FC.

Many questioned this news and further insisted that it was just for publicity stunts.

However, critics were left with no other option than to bow their heads in shame after Lilwin‘s professional football ID card surfaced on the local digital space yesterday.

As sports journalist, Saddick Adams took to Twitter to share Lil Win’s ID Card which shows the actor is now recognized as a professional footballer by the Ghana Football Association.

Lilwin, who is happy to have proven his attackers wrong once again has also broken silence on this new development.

In a post that has been sighted on his IG page, he praised himself for the new enviable feat he has attained and further added that he will become the president of the country in the future.

“People always doubt me when I say am doing something.when I started acting people doubted same as when I started music and now people are also doubting I can’t be future president
Here is the proof that am ready to play for New Edubiase United
My ID card is ready
#weezyempire #yenkonkoaaa“