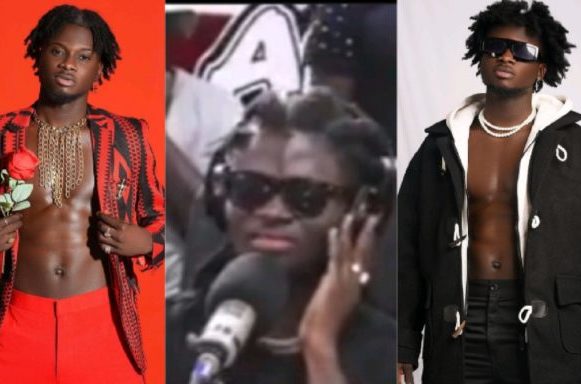 Lynx entertainment signee, Kuami Eugene, has heartfully extended his benevolence to a die hard look-alike fan of his.

Prior to meeting Kuami Eugene vis-à-vis, this look alike fan had become an internet sensation after consistently sharing videos of himself performing all of the Rockstar’s hit songs.

The guy who goes by the internet name Junior Kuami Eugene had also always expressed his ardent desire to meet his music idol in most of the videos that he shared on the various social media platforms.

Well, it was a dream come true for him yesterday when he finally met the “Bunker” hitmaker in the studios of Angel FM.

According to the guy, he traveled all the way from Techiman to wait for Kuami Eugene in the studious of Angel FM (Accra) when he heard that the artiste with be granting an interview on the FM station.

Kindhearted and generous Kuami Eugene reciprocated the love his look alike staunch supporter had shown him by giving him $100, which is equivalent to 600 cedis.

Check out the video below to know more…

Photo of Shatta Wale on his knees before IGP surfaces