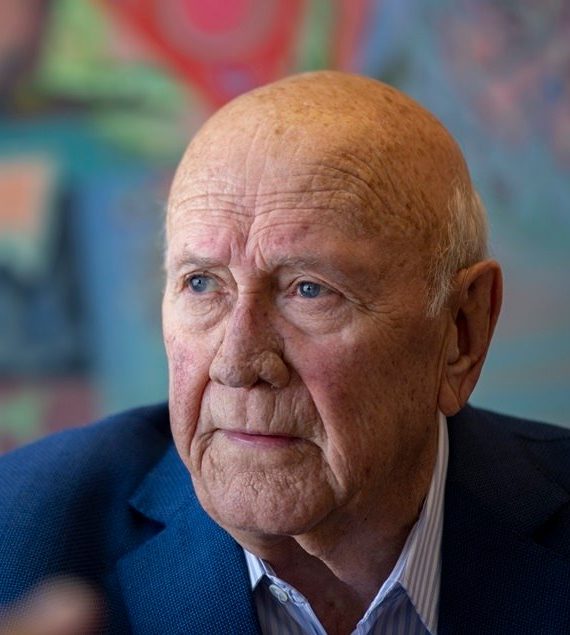 FW de Klerk, the last president of apartheid South Africa and a key actor in the country’s transition to democracy, has died.

The FW de Klerk Foundation’s spokesperson Dave Steward confirmed his death to News24 on Thursday. “The former president died earlier this morning at his home in Fresnaye after his struggle against cancer. He was 85-years-old. He is survived by his wife Elita, two children Susan and Jan, and his grandchildren.”

President Cyril Ramaphosa is expected to announce details of De Klerk’s state funeral in due course.

In a statement on 8 June 2021, the foundation said he was diagnosed with mesothelioma – “a cancer that affects the lining of the lungs” – in March 2021. He was receiving immunotherapy for the illness.

De Klerk was the head of state from September 1989 until May 1994 and became one of the country’s two deputy presidents after the first multi-racial, democratic election in April 1994.

The son of a National Party senator and minister, De Klerk entered Parliament in 1972 after training as a lawyer and winning his seat in Vereeniging, in what was then known as Southern Transvaal. He was appointed to the Cabinet of prime minister John Vorster in 1978 and served in various portfolios, including Minister of National Education. De Klerk was also a member of the Broederbond, the secretive Afrikaner organisation then active in politics and society. On 2 February 1990, exactly one year after taking the reins as National Party leader, De Klerk announced to Parliament that he was unbanning the ANC, SACP, PAC and other liberation movements, and that he was releasing Nelson Mandela unconditionally. This led to a multi-party negotiation process between 1990 and 1994, paving the way for the democratic election.

The 1993 Nobel Peace Prize was jointly awarded to De Klerk and Mandela, who became the country’s first democratically elected president the following year.

A white hearse with hazard lights flashing left late former president FW De Klerk’s home in Fresnaye on Thursday afternoon. The only sound was the snapping of camera shutters as photographers captured the moments after the announcement of his death.

De Klerk became the first leader of the opposition after the election and led his party from the Government of National Unity in June 1996. He retired from active politics in August 1997.

He testified at the Truth and Reconciliation Commission on behalf of the National Party in August 1996 and May 1997, where his apology for apartheid was criticised as insufficient.

After his political career, he launched a foundation in his name, which sought to play a role in civil society as a watchdog and think-tank. He also became involved in a global leadership initiative called The Elders, consisting of former heads of state who advocated for the rule of law and human rights.

Recently, De Klerk became mired in controversy. In 2012, he defended aspects of apartheid during an interview with CNN’s Christiane Amanpour and in 2020 he refused to concede that the system was a crime against humanity.