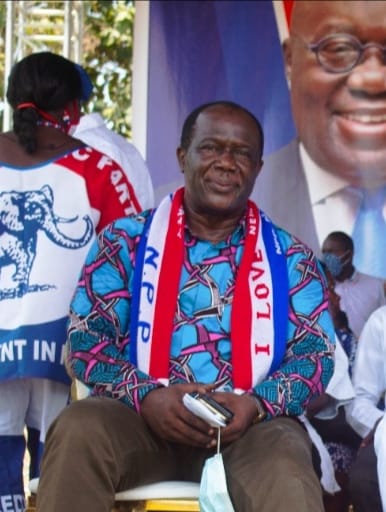 One key contestant for the Upcoming Chairmanship position of the ruling New Patriotic Party, Mr Kwabena Abankwah-Yeboah is gradually and tactically warming himself into the contest. A man of few words, he is a tactician par excellence, focused, determined, decisive and fearless.

His method of contesting may confound people. He’s not the type who makes unnecessary noise on rooftops, clanking the cymbals, blowing the bugle but rather he systematically engages in a low key campaign, targeting his message to the relevant quarters. Until his appearance for the National Treasurer bid, many people did not know much about him, but he stunned many party people with his resounding victory. Since then, his performance as National Treasurer has endeared him to a majority of party people. The transparency, equity and fairness he has exhibited in discharging his duties has boosted the confidence of the grassroots and improved conditions within the party in general. In the current race for the National Chairmanship position, some of us see Abankwah-Yeboah as the ‘Dark Horse to pull ANOTHER BIG surprise.

l do not doubt all of his capabilities and abilities. Historically, Mr Abankwa Yeboah, AKA, “By The Grace of God” per his staunch religious belief, is a founding and grassroot member of our dear party from the Dankwa – Busia Club days in the 90s up till 92 when our party was officially out- doored. He has consistently played a pivotal role in the party since then to date. He has held executive positions, made giant contributions to support the party unannounced.

He has been keeping his cards to his chest. Currently, he is the incumbent National Treasurer of the party, a position everyone in the party agrees has done a TREMENDOUS job unprecedented in the annals of the party’s Financial management history. So the general consensus of the grassroots is that if he has meticulously and sincerely handled our finances so well, why do we deny him the ULTIMATE? After all, he who shoots better is positioned to shoot the game during hunting.

Without any doubts, l can confidently predict that Abankwah will be a GOOD Chairman and he towers well above all the other contestants in my estimation. Humility, Godliness, Sobriety, Gentility, Sincerity, Hard work, Result Achiever, Respect for Everyone, Ready -To – Listen, Development -Oriented, Down -To- Earth are a few of his hallmarks. His avowed ambition and goal is to ANNEX the third victory for NPP in 2024, and he says Inshah Allah, IT SHALL HAPPEN !! Good Luck, Kwabena Abankwah-Yeboah, God Be With You as you strive forward.

Related Topics:The Man Abankwa Yeboah; Soaring Like The Eagle
Up Next