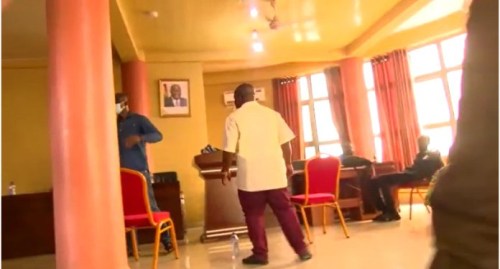 The rejected nominee was seen in a viral video demanding a refund of his money from some assembly members. “The Office of the Special Prosecutor (OSP) has commenced investigations into allegations of corruption and corruption-related offences (especially corruption and intimidation in respect of a public election) in relation to your nomination and confirmation or otherwise as to the MCE of Juaben Municipality in the Ashanti Region,” a statement signed by Agyebeng said.

Meanwhile, the MCE nominee is on a police enquiry bail having been arrested on Monday (1 November) over the video.

The assembly members of the Juaben Municipal Assembly for the second time on Monday rejected the president’s nominee for the metropolitan chief executive (MCE) position.

Alexander Sarfo Kantanka failed to obtain the two-thirds threshold needed to be confirmed as MCE for Juaben Municipal  Assembly in the Ashanti Region.

He polled a total of 10 ‘YES’ votes as against 15 ‘NO’ votes while a ballot was rejected.

Twenty out of the 26 assembly members boycotted the process last Friday, citing heavy security presence at the venue.