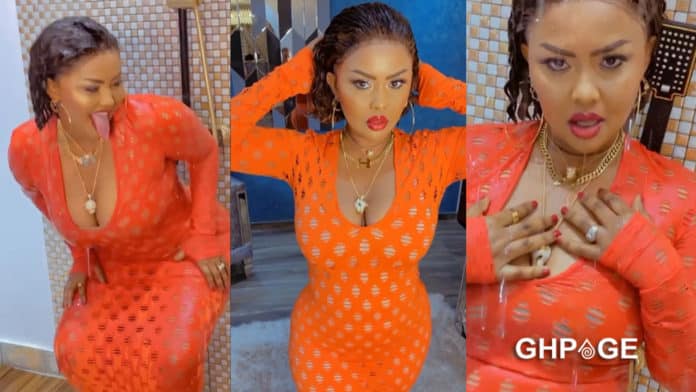 Actress and media personality Nana Ama McBrown is back with a big bang after months of going off the screens to seek medical care.

The 44-year-old screen goddess laid down her tools to undergo a surgical procedure after she slipped and fractured her right arm in an accident at home.

Nana Ama, who is the host of McBrown’s Kitchen and United Showbiz on UTV, in a video sighted by GHPage.com on Instagram in August, told her fans that she was compelled to fly to Germany to get treated.

According to Nana Ama, although she had been attended to by Ghanaian doctors and a team of surgeons, her recuperation is not like before, hence had to travel overseas for advanced medical care.

The actress recently shared a video on social media in which she emphasised her return to the screens, writing “the queen is back”.

Cladded in a see-through orange dress with a plunging neckline baring her cleavage, Nana Ama was seen flaunting her curves in the figure-hugging outfit during a bathroom photoshoot as she whined her waist seductively for the cameras.

Moesha Boduong bounces back on IG, reveals her favourite celeb in photo