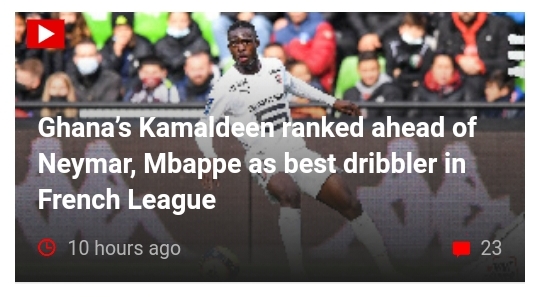 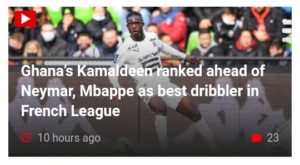 Kamaldeen Sulemana’s flying start to life in France continues to earn him accolades with the youngster now declared the most successful dribbler so far in the 2021/2022 French Ligue 1.

The Ghanaian winger has been ranked number one in Ligue 1 with a rating of 6.44 dribbles in every 100 minutes by the Football Observatory (CIES).

Trailing the 19-year-old Ghanaian is PSG superstar Neymar Jnr who has 6.28, Sofiane Boufal follows with 5.52 and Kylian Mbappé completes the top four with 5.33.

In Europe, Kamaldeen’s record is only bettered by Adama Traoré of Wolves, Rafael Leao of AC Milan and Allan Saint-Maximin of Newcastle.

The latest record comes after he was recently named the second most in-form player in Europe. According to data from the reliable WhoScored.com, only Liverpool’s Mohamed Salah is in a better form than the Ghanaian.

In nine matches played so far, Kamaldeen who is enjoying his first season in top European football has managed four goals and an assist.

He is already being linked with Arsenal and Liverpool who are said to be keeping tabs on the youngster amid uncertainty over the futures of Pepe and Salah respectively.

His form will impress Black Stars coach Milovan Rajevac who is drawing up his team for the crucial World Cup qualifiers against South Africa and Ethiopia.

Ghana needs six points from those two games to advance to the next stage of the qualifiers and Kamaldeen who impressed against Ethiopia last month is one player Milovan Rajevac will be counting on.

Source: www.ghanaweb.com
Related Topics:AHEADASBESTdribblerFRENCHGhana’sINKAMALDEENLEAGUEMBAPPENeymarOFRANKED
Up Next