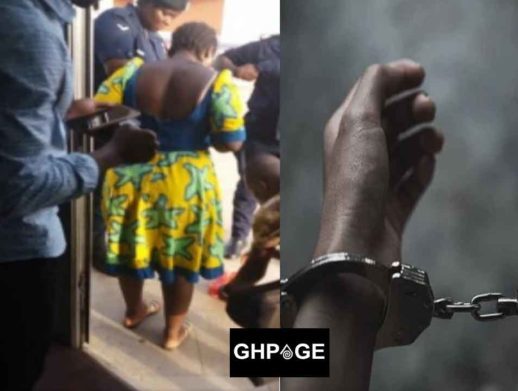 A 24-year-old woman has been apprehended by the police for stabbing her biological mother whom she claimed sleeps with her spiritually.

The suspect stabbed her 46-year-old single mother on the neck, back, and hand on several occasions over claims that her mother has sexual intercourse with her spiritually.

The Prosecuting Superintendent of Police, Patience Mario who confirmed the incident disclosed that the suspect who is unemployed lives with her mother and brother.

The victim who is a single parent has been taking care of the suspect and her brother since they were abandoned by their father.

In explaining how the unfortunate incident happened, Madam Patience Mario indicated that the victim and the suspect had a misunderstanding on 27th October 2021.

The suspect accused the victim of getting married to her spiritually or also sleeping with her.

The 24-year-old woman then stabbed her mother in the neck, hand, and back severally until the knife broke.

The victim’s shout for mercy was heard by co-tenants who rushed to the room and rescued her.

She was then rushed to the Abokobi Health Centre for first aid and later transferred to the 37 Military Hospital where she is currently on admission.

The suspect was also arrested by the Abokobi Police and later handed over to the Domestic Violence and Victims Support Unit.

She was, however, remanded into police custody by the Adentan Circuit Court and will reappear before the court on November 16th, 2021.