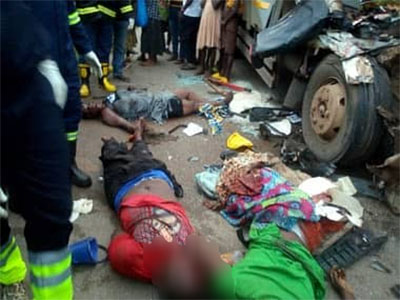 17 people are feared dead in an accident that occurred Monday dawn at Offinso Abofour in the Offinso South District of the Ashanti Region.
Sixteen others who sustained varying degrees of injuries are receiving treatment at St Patrick’s Hospital.

The accident involved a Sprinter Bus heading towards the Northern part of the country and had on board head porters numbering 31 and a Trailer loaded with logs travelling down south.

Preliminary investigations by the National Road Safety Authority indicate both drivers were tired and veered off from their lanes colliding head on.

Information gathered by TV3 has it that most of the casualties are children of the head porters.