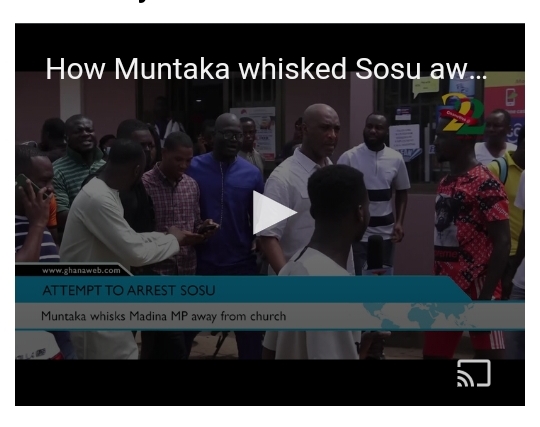 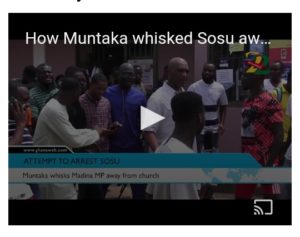 It took the Minority Chief Whip of Parliament, Mohammed-Mubarak Muntaka, to whisk his colleague and MP for Madina, lawyer Francis-Xavier Sosu away following a second attempt by the police to arrest him on Sunday.

On Monday, October 25, 2021, some police officers tried to arrest the Madina MP during a demonstration on bad roads in his constituency, which at a point saw the burning of tyres and blockage of roads.

Close to midday on Sunday, October 31, 2021, GhanaWeb picked up information that some police officers had surrounded the Believers House of Prayer Church in Madina, where the MP was worshipping, to effect his arrest.

Several supporters of the National Democratic Congress were seen on the premises upon GhanaWeb’s arrival. A couple of police officers from the Madina command who had learnt of the situation were also around while the church service was still ongoing.

The officers who had come to make the arrest, however, were not on the premises when we arrived.

The MP who was still in the Chapel was later whisked away by the Minority Chief Whip and Member of Parliament for Asawase, Mohammed-Mubarak Muntaka, who also showed up upon learning of the situation.

The Asawase MP was driven into the compound in his Toyota Land Cruiser V8. In a calm manner, he got out of the car while on phone with someone and made his way into the chapel avoiding to answer questions asked by our journalist.

Some party supporters who had turned themselves into security men, made way for the MP.

A few seconds after entering, the door to the church was opened again and Muntaka emerged with the Madina MP following closely behind him, flanked by two people believed to be party supporters.

Together they made their way to the former’s car which had its engine still running. The Minority Chief Whip opened the right back door and ushered his colleague into the car while he sat in the front passenger seat.

The driver then sped off immediately both men were in the car.

Source: www.ghanaweb.com
Related Topics:ARRESTAWAYchurchfoilHowINMUNTAKASosuTOwhisked
Up Next