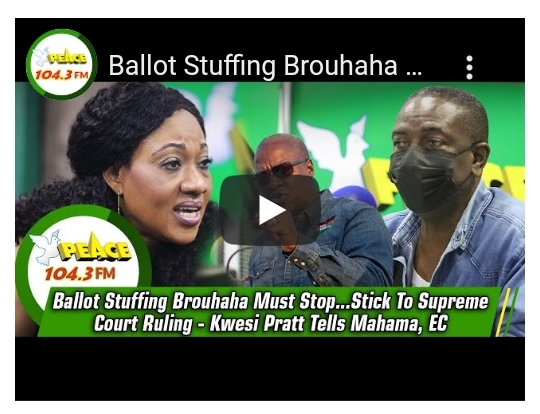 Seasoned Journalist, Kwesi Pratt Jnr., has called on the opposition National Democratic Congress and the Electoral Commission to cease fire over the 2020 election results.

Mr. Pratt dreaded the altercation over the election results may cause mayhem in the nation if not stopped.

The former President is said to have accused the EC of ballot stuffing in favour of President Nana Addo Dankwa Akufo-Addo.

“2020 was Ghana’s worst election. If I was marking her, I would have given her an F. She is marking her own paper after the examination so she can give herself any mark she likes”.

“Tell me which election in Ghana was ballot papers printed yet one million ballot papers were found elsewhere…We didn’t witness this under Dr. Kwadwo Afari-Gyan. She [Jean Mensa] knew there was ballot stuffing,” Mr. Mahama said.

The EC, in response, has filed a complaint with the Police to investigate Mr. Mahama’s allegations.

”The Former President has said the EC thumb printed 1million ballots in favour of the president. This is untrue. This is a grave matter that undermines the credibility of our electoral process and should not be ignored. We call on him to provide evidence to support his claim. This is not a matter to be ignored and we call on the Ghana Police Service to investigate this,” the Commission said during its ‘Let the Citizen Know’ series in Accra.

To Mr. Pratt, the opposition party and the EC should let sleeping dogs lie because investigating the former President’s claims could cause an even more disturbing situation in Ghana.

He feared the Police, through their investigations, might reveal something that may have legal consequences on the country.

‘Ghana Armed Forces is ready to deal with any threat’