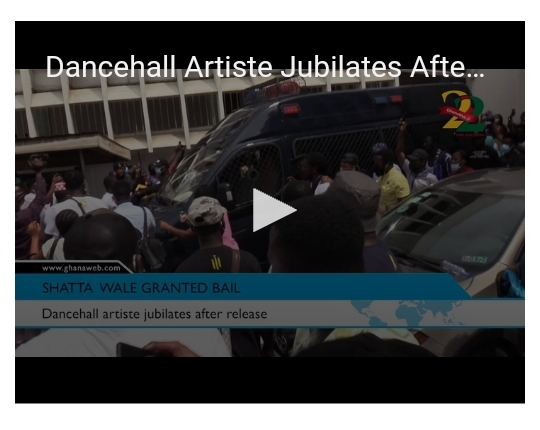 • Shatta Wale was arrested with 3 others for publishing false news

Dancehall artiste, Shatta Wale, could not hold his joy after being granted bail by an Accra Circuit court.

Shatta Wale who was calm before and during the court process was seen jumping joyously in the police van after today’s court proceedings.

Clad in all white the musician could not hide his excitement about the court’s decision to grant him bail after a week on remand.

Prior to that, he was relatively calm throughout his walk from the courtroom to the police van.

According to them, their client is not flight risk and will not escape.

His 3 accomplices, Kojo Owusu Koranteng, Idris Yusif, and Eric Venator, were also granted bail on grounds that they had been counselled, are not flight risk, and will not escape.

They have since been granted a bail of 100 thousand cedis.

Shatta Wale was granted a self-recognizance bail whilst each of the other accomplices was granted bail with a surety each.

Shatta Wale was arrested on October 19, 2021, together with his three friends after faking a gunshot attack.

The Shatta Movement boss was charged with the publication of false news and causing fear and panic.

His cohorts, Kojo Owusu Koranteng, Idris Yusif, and Eric Venator have also been charged with abetment of crime.

Rapper, Medikal is also in court today, after five days on remand.

He was remanded by a Circuit Court judge in Accra on October 22, 2021, for brandishing a weapon in a video found on social media.

Medikal has been charged with the display of arms and ammunition.

Source: www.ghanaweb.com
Related Topics:afterCheckfreedomMOVESoutRELEASEshattaWales
Up Next