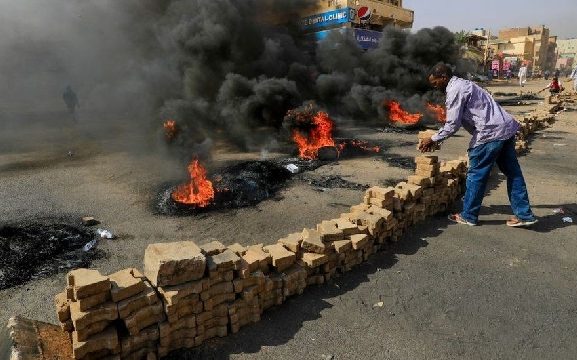 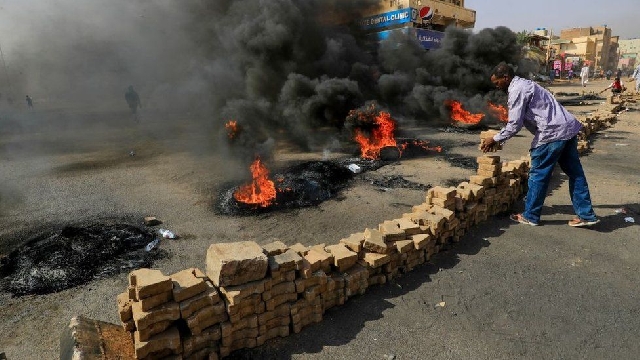 Demonstrators block roads in the capital, Khartoum, in protest at the arrests

Members of Sudan’s transitional government and other civilian leaders have been arrested amid reports of a military coup.

Prime Minister Abdallah Hamdok is among those reported to have been put under house arrest by unidentified soldiers.

Pro-democracy protesters have taken to the streets of the capital, Khartoum.

Military and civilian leaders have been at odds since long-time ruler Omar al-Bashir was overthrown two years ago and the transitional government set up.

Video footage from the north African nation’s capital on Monday showed protesters manning lit barricades and entering the area near the military’s headquarters, with soldiers looking on.

No-one in the military has commented so far and it remains unclear who was behind the pre-dawn arrests.

A statement from the information ministry on Facebook said the detentions were carried out by “joint military forces” and those arrested were being held in “an unidentified location”.

The ministry said soldiers had stormed the HQ of the state broadcaster, in Omdurman, and detained staff there.

It also said Mr Hamdok was being pressed to support a coup but was refusing to do so and he urged people to continue with peaceful protests to “defend the revolution”.

The United States was “deeply alarmed” by the coup reports, its special envoy for the Horn of Africa, Jeffrey Feltman, said. The UN, EU and Arab League also expressed deep concern.

Witnesses say the internet is down and that army and paramilitary troops have been deployed across the city. Khartoum airport is now closed, and international flights are suspended.

Sudan’s main pro-democracy group has called on its supporters to resist any military coup.

The military and civilian transitional authorities have ruled together since President Bashir was toppled after months of street protests in 2019.

A power-sharing deal between the military and a loose coalition of groups – the Forces for Freedom and Change (FFC) – had been agreed, launching the Sovereign Council.

It was to rule the country for another year – with the aim of holding elections and transitioning to civilian rule.

But the deal has always been fractious, with a large number of rival political groups – and divisions within the military too.

Tensions grew further after a coup attempt attributed to followers of Mr Bashir was foiled in September.

This month, opponents of Sudan’s transition to democracy took to the streets of the capital, Khartoum, to call on the army to take control of the country.

Pro-democracy groups said it was an organised attempt by the military to retake power.

Last Thursday, tens of thousands of people demonstrated in Khartoum to show solidarity with the transitional government.

Support for the interim government has slumped in recent months as the country’s economy has struggled.

Sudan has been unable to find a workable political system since independence in 1956 and has seen numerous coups and coup attempts.