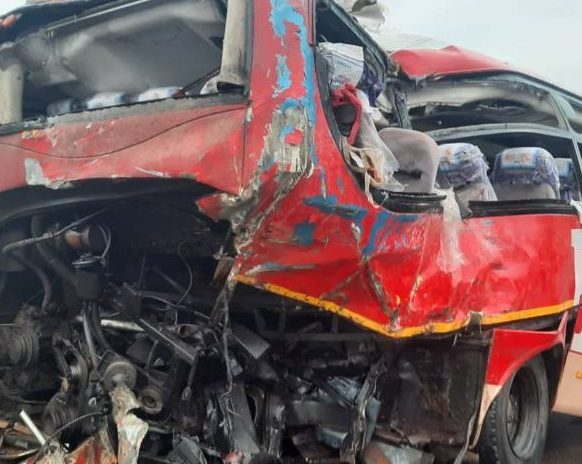 Two Drivers are feared dead with five others seriously injured in an accident involving three cars at Gomoa Buduatta Junction on the Kasoa-Cape Coast Highway in the Central Region.

The three vehicles involved in the accident were a Toyota Fish passengers car with the registration number GW 7237-21, Toyota Highlander with number GE 5740-12 transporting hardware, and an unregistered Hyundai Elantra with DV 1551 number plate.

Eyewitnesses say the Toyota Highlander and the unregistered Hyundai Elantra made wrongful overtaking and collided with the Toyota fish.

In an interview with Adom News, some of the witnesses expressed fear the drivers of the Elantra and the Highlander may not survive.

This, they said, was due to the degrees of their injury.

The duo together with the five others has been sent to the Winneba Trauma and Specialist Hospital for treatment.

Meanwhile, the driver of the Toyota Fish and some survivors said the accident could have been prevented if both cars avoided overtaking.