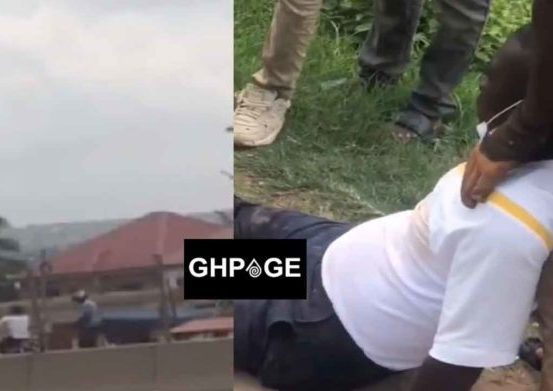 Information reaching our outfit indicates that there has been a daylight robbery this afternoon at Kwashieman, Accra.

According to reports, one man was shot in the leg after the robbers attacked him and made away with the money he withdrew from the bank.

In a video, the robbers were seen speeding off on their motorbikes after shooting the victim and making away with his money.

Passers-by who were around when the incident took place watched in amazement and fear as the robbers sped off.

Sources indicate that the victim has been rushed to the hospital for treatment.

The country has recently recorded a rise in daylight robberies and has brought fear to Ghanaians who have shared their thoughts on the recent happenings.

Read some comments below;

ministerike wrote; “Seriously Ghana is not safe the government is not doing nothing about it. Most of my colleagues dnt want to come to Ghana because of this insecurity in the country……whereas kofi boakye this man is powerful they should use him to control this problem”.

lyricsdaboss2222 also added; “Ghana is not save at all”.