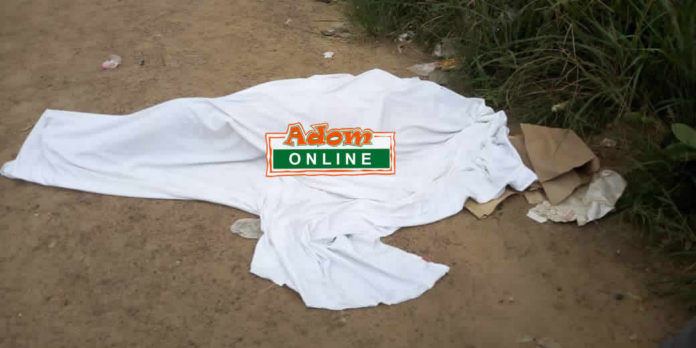 A nursing mother, identified as Magasuba Mariam, has lost her life in an accident on the Kasoa-Obom road in the Awutu Senya East Municipality of the Central Region.

The nursing mother, believed to be in her forties and a mother of a six-month-old baby, was said to be a passenger on a motorbike which was crashed into by a water tanker.

It is said that she took advantage of the Kasoa new market day to purchase some foodstuffs which she was carrying behind the motorbike.

A witness, Asana Iddrisu, said upon reaching the Freetown junction, the water tanker with registration number AW 1047-Z driving in the opposite direction rammed into them.

She added that the crash caused severe damages to the woman’s head and she died instantly.

Another witness told Adom News’ Seth Kofi Adjei that the lady was riding without a helmet, hence the disaster.

The motor rider, however, survived with minor injuries and he has been arrested together with the tanker driver.

They are being caged at the Kasoa Divisional Police Station.

Meanwhile, some residents at Kasoa Freetown also called on the government to re-examine the ‘Okada’ business.

They also appealed for speed ramps on the Kasoa-Obom Road.

The residents said the most painful aspect is that the deceased gave birth six months ago.

The Central East Deputy Regional Police Commander, ACP Oduro Amaning, confirmed that both drivers are in their custody.