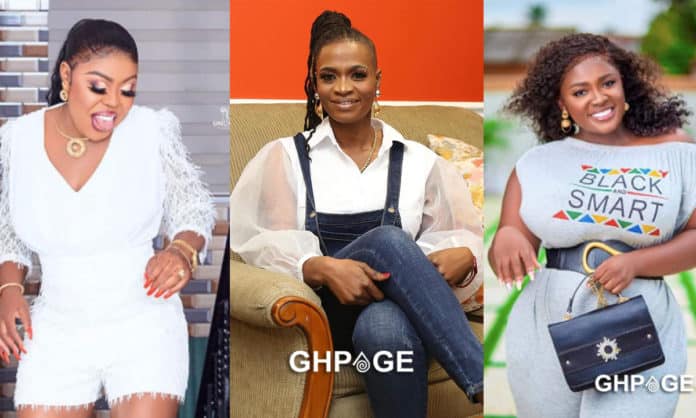 Ayisha Modi says the Acting Inspector General of Police can only restore the trust of Ghanaians in the Police Service when he arrests people like arrests actresses, Afia Schwarzenegger and Tracey Boakye for crimes she claims they have committed in the country.

The staunch supporter of Stonebwoy called on Akuffo Dampare in a lengthy post on Instagram while expressing his support for embattled preacher Reverend Isaac Owusu Bempah.

According to a disgruntled Ayisha, Afia and Tracey Boakye have committed the worse crimes including the alleged blackmail of ex-President Mahama yet are walking freely, but Rev. Owusu Bempah is being treated like a hardened criminal.

She argued that Bempah’s arrest smacks of set-up considering how he was denied bail and made to spend days in police cells while Tracey and Afia, who also went to Police cells to film inmates (Adu Safowah), have not been taken in for questioning or prosecuted.

“We were in this country when filthy braggart who claimed to be a landlady in east Legon blackmailed the former president. We were here when fake Agradaa sent his boys to beat one young guy. We were in this country when fufu fonu borla bird went to a police cell to film inmates. What happened to them? What happened to their cases? Are these fools above the laws of the country?

“If the IGP want us to trust in the police service, then he should open these cases up. He should arrest some of these fools and investigate their cases. If not, then Rev. Owusu Bempah’s arrest is a set up.”

She continued: “These fools committed the worse crimes yet are walking freely so is Owusu Bempah’s case different?

“We should not be hypocrites in this country. Agradaa has done worse than someone just walking to her house with his boys. She’s a criminal and she admitted it. What is happening to her case?”

See the screenshot below.