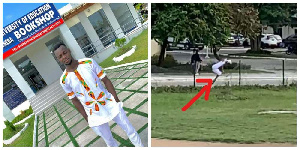 The deceased landed on his neck while performing backflips

• According to reports, he was an expert gymnast

A final year student of the University of Education Winneba has reportedly died after he suffered a neck injury during a celebration.

According to a report by Myjoyonline.com, the deceased in an ecstatic mood after writing the last of his final papers decided to celebrate the milestone by performing backflips.

In a video sighted by GhanaWeb, the deceased who was in the Department of Health, Physical Education, Recreation and Sports, and also said to be an expert in gymnastics, landed on his neck while being cheered on during his celebratory performance.

“Unfortunately, Abdul failed in the stunt during the somersault and landed awkwardly on his neck,” the Myjoyonline report adds.

Having sustained injuries to his neck and spine following the incident, the deceased was reportedly rushed to the Korle Bu Teaching Hospital for medical attention but he died while receiving treatment.

In reaction to his sad demise, some people on social media expressed shock with others pointing out that Majeed was an expert in gymnastics who loved doing backflips.

Source: www.ghanaweb.com
Related Topics:backflipsCELEBRATEdiesexamFINALperformingstudentTOUEWWHILEyear
Up Next

PHOTOS: Angry students burn down school as principal fails to register them for WAEC exam