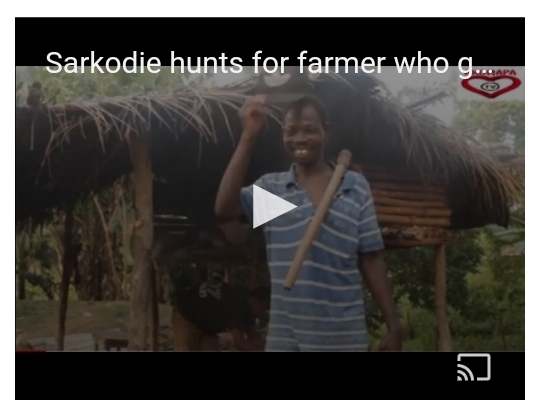 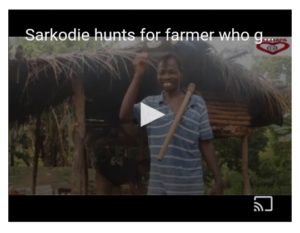 • The rapper is amazed and wants to reward the farmer

• Sarkodie wants the public to assist him locate the farmer

A video clip of a farmer effortlessly performing Sarkodie’s ‘Politics’ has triggered feelings of nostalgia with the rapper initiating moves in search of the man to honour him.

In a footage shared by Twitter handle @kwabenaofficial, the farmer could be seen in front of a hut with a hoe hanging on his left shoulder. Clad in a blue t-shirt with stripes and a cap, the farmer first serves indication of his readiness to entertain Ghanaians with a performance of Sarkodie’s song.

Like a performer whose ultimate motive is to entertain his audience, the farmer was in character; he looked straight into the camera, rapped with ease amid gestures.

“Sarkodie’s music speaks to all. I’ve seen videos of children rapping to Sarkodie’s raps; same too with youth but this time around, it’s a farmer in his 50’s rapping and it’s amazing and inspiring,” Kwabena’s tweet read.

Moved by the performance, Sarkodie replied: “I can’t even remember these lines back to back. I’m touched… if someone can link me to this man, I want to give him a gift … Bless him.”

The song which was mixed by Posigee gained popularity for various reasons including the display of lyrical dexterity; concept and instrumentation.

Source: www.ghanaweb.com
Related Topics:EMOTIONALfarmerFORGOTHIMHUNTSsarkodieWHO
Up Next

VIDEO: How Addiself met his wife Jasmin of 4Syte TV will shock you