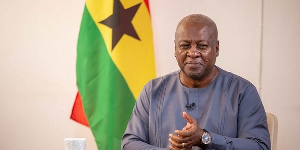 • He accused the current government of eroding them all

The former president, John Dramani Mahama, has lamented how the current government only messed up things when they took over.

Mahama noted that the country still faced retrogression despite all the giant strides his government made towards further stabilizing the economy,

Speaking at The State of Ghana’s Economy, The Score card, organized by the National Democratic Congress’s The Professionals Forum (PROFORUM) in Accra, he described how one by one, amidst the challenges at the time, the previous government was able to steer the economy on track.

“I am on record to have predicted in November 2016 that, due to the work we had done to overcome the economic headwinds and the coming on stream of two additional oil fields, economic growth will go past 7% in 2017 and beyond. This was confirmed by the World Bank and IMF, predicting growth above 8% for the same period.

“Additional oil revenue, a resolved energy crisis paving way for more and sustainable generation of power and sound implementation of our home-grown policies were going to make life comfortable for the new government after 2017,” he stated.

John Dramani Mahama, however, added that with all these gains, the Nana Addo Dankwa Akufo-Addo administration has managed to only erode all of them, plunging the country into untold crisis.

“Despite these favourable conditions, most of the gains we made and bequeathed to this government have been eroded and we have been plunged into further economic crisis,” he explained in a statement.

The former president addressed the forum with Seth Terkper, a former Minister of Finance, and Sam Pee Yalley, a former Ambassador to India, and the National President of PROFORUM.