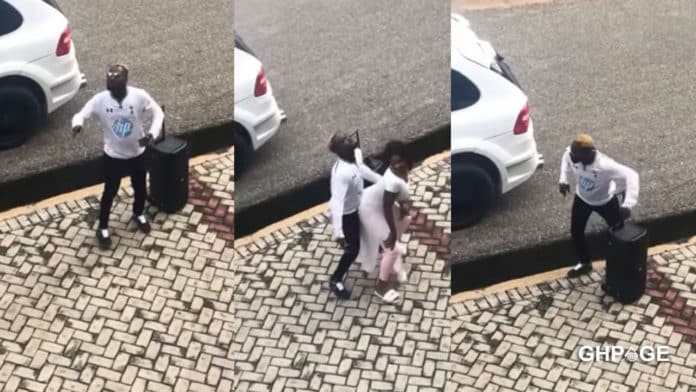 As it stands now, seems comic actor Funny Face needs to be talked to kept somewhere to stop him from disgracing himself much more.

The actor is currently enjoying himself in Koforidua the Eastern part of the country after he got involved in an accident some days ago on the Accra-Kumasi road.

After his accident, he has been to several towns in the Eastern Region where he always carries his speaker to play songs and dance in the full glare of the public.

According to some netizens, despite the fact that he is a comic actor, he is actually disgracing himself with some of his actions in recent times.

That being said, Funny Face once again took his speaker to the campus of Koforidua Technical University where he once again started playing songs and was dancing with full excitement.

He was joined by a female student while the other students hailed him on.

Failing to go and meet his baby mama and family in Kumasi to officially apologize for his actions some months ago due to his accident near Linda Dor, Funny Face decided to spend some time in the region to have fun.