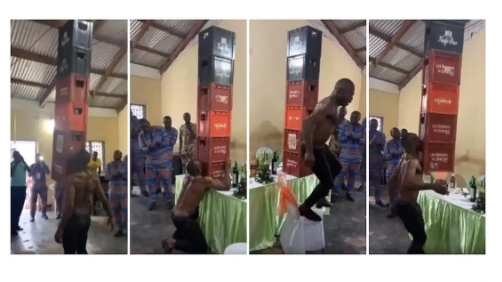 The crate challenge that has been causing a commotion on social media has been tweaked by a man’s new display.

In a viral video shared by Tringlobe Media on Facebook, the man, instead of walking on piled crates, lifted his.

The man however lifted the crates with just his teeth. In the incredible video, six crates were lined up on a covered table.

The unidentified man after doing some weird dance moves proceeded forward and carried the crates at once without the use of his hands.

Guests were left awestruck as they watched the man move around with the crates lifted by his teeth before dropping them back on the table.

Fountain of Assemblies of God, Manhean To Celebrate 15th Anniversary!

VIDEO: How 9-year-old boy escapes from kidnappers in Kasoa