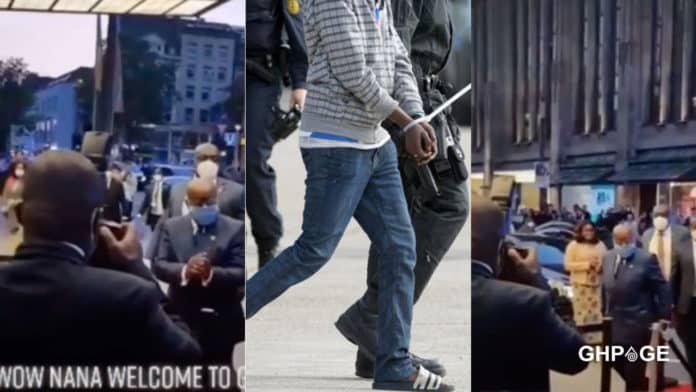 Information reaching the news desk of Ghpage.com has it that the Ghanaian man based in Germany who was heard shouting Nana Addo fix the country during the President’s recent visit to the country has been allegedly deported.

Last week a video surfaced on social media of President Nana Addo Danquah Akuffo Addo in Germany for a meeting with other leaders from different countries.

Some Ghanaians based in Germany as usual gathered in their numbers to welcome the President upon his arrival at the venue, they welcomed him and asked him to fix the country because they want to return home.

Nana Addo after exchanging fist bumps with some of them rushed inside but in the video one could still hear the person recording the video giving commentary on the President fixing the country and bring along people who had no business in Germany along with him on his trip.

Well, from what we are gathering the man who was heard in the video giving the commentary has been deported back to Ghana for not having his relevant papers.

According to the source, during the time the President was exchanging the fist bmps with them, he had to pull his hand back when it got to that man because they claim the way the man brought his fist looked like he wanted to give the President a blow.

It continued that after the President had entered the building, the German police came over to the man to took him in for questioning.

The source added that is was during the questiong peiod that he was asked about his documents only to find out that the papers were not complete and therefore had to deport him with immediate effect.

Following this a lot of Ghanaian who have heard this unfortunate news reacted to it:

Joshua Ocansey: “If he had a serious job in Germany, he would not be there waiting for Nana just to shout those nonsense. Me, even if Nana is coming to my next door neighbor on a working day, I wont even bother seeing him coz I came here to work and feed my family back home not do stupid politics…”

Anaxi Kay: “How dumb can he be? You don’t have documents and you’re protesting in front of the police?”

Francis Kotoka: “If the guy didn’t have documents paa and doing that thing in Germany, then he is the cause of his doom”

Dorothy Asamoah: “Sometimes people just create problems for themselves without thinking about himself or herself why should you go to such place when u know you don’t have documents mmm“

Yeboah Philip: “He who wants equity must come with clean hands??..We welcome our brother home”

Body of British journalist killed in Ghana to be repatriated