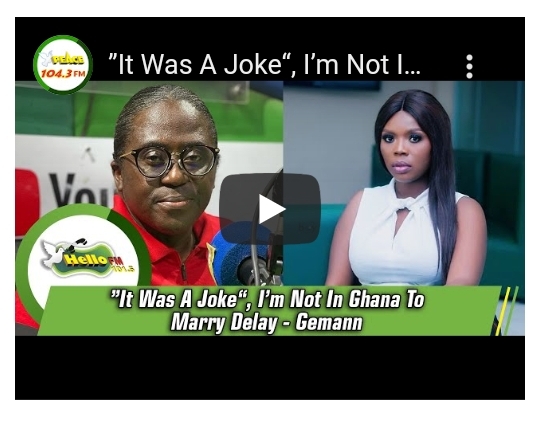 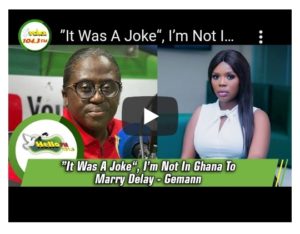 • Gemann said his comments were taken out of context

• He said his comments were simply jokes and nothing more

After publicly declaring his intentions to settle down with Delay during an interview with Kingdom FM, Veteran Ghanaian dancer, Gemann has retracted his statements.

He said his statements were taken out of context; adding that Ghanaians are fond of concluding instead of analyzing issues.

One can recall that Gemann in an interview with Kingdom FM disclosed that he left the United States to Ghana purposely to find true love; adding that Delay is the chosen one.

“Marrying Delay is one of the biggest plans I intend to achieve. After I lost my ex-wife, I have not married any other woman. I travelled all the way to Ghana to purposely marry Delay,” he earlier stated.

Gemann’s comments sparked controversy among individuals on social media including Delay who described him as a clout chaser.

Reacting to the issue on social media, Delay said their paths have never crossed.

“I’ve never met him before. It’s called clout chasing,” she stated when a social media user asked of her opinion on the matter.

But responding to all of these, Gemann who appears unhappy about the public outburst following his earlier observations stated in an exclusive interview with Peace FM monitored by GhanaWeb that;

“It’s not true. There is a page in my book where I spoke about the ability for Ghanaians to reason as against being emotional. Most Ghanaians cannot analyse issues so we just jump at any stories we hear. Whether true or not. In a bid to refer to that, I gave an example that I will want to marry delay but as usual, they didn’t analyze what I said and just jumped to conclusions. I wanted to prove a point and the point has been made. What I said was a joke.”

Source: www.ghanaweb.com
Related Topics:ADELAYGEMANNIitsjokeMarryretractsstatementTOwant
Up Next

WATCH: KiDi’s ‘Touch It’ song gets international appeal as Indians jams to it